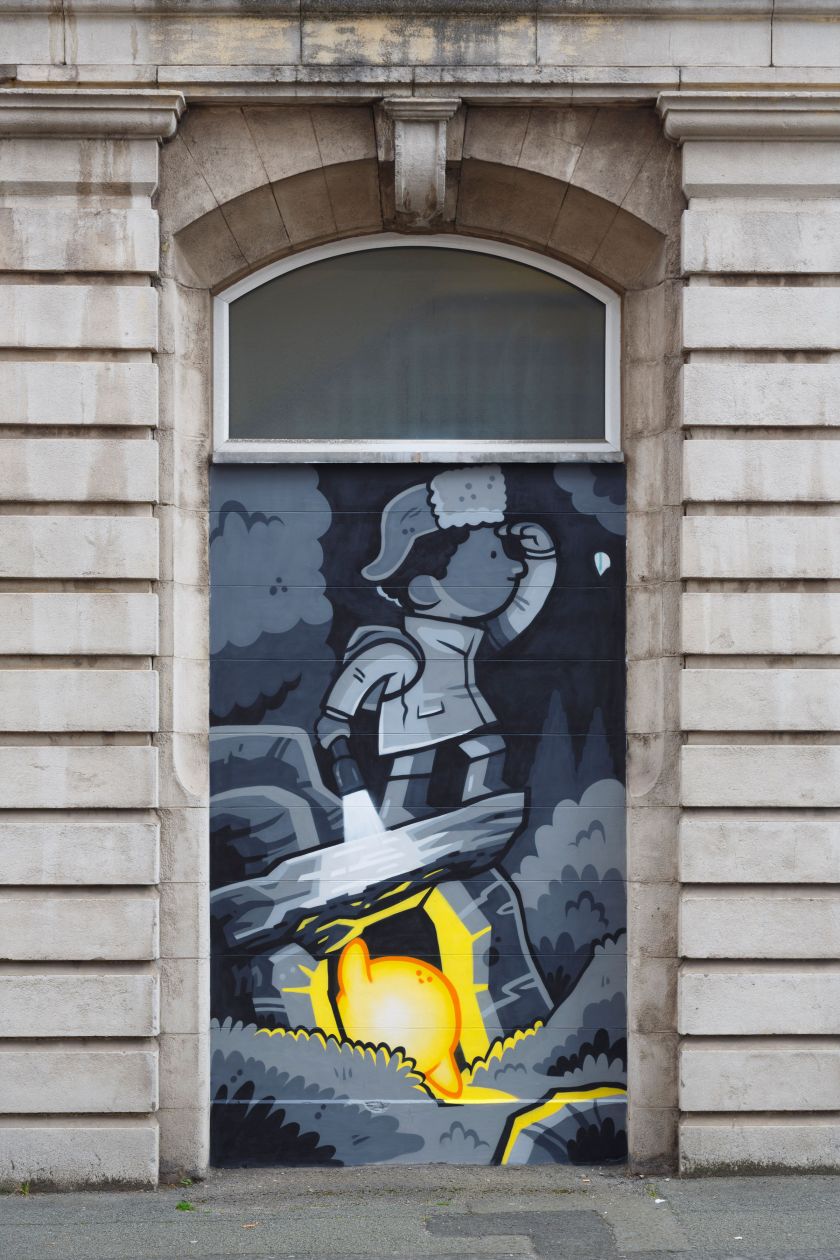 If you live in or around Manchester, you’ll undoubtedly be delighted to hear some positive news today. Brace yourselves for 50 Windows of Creativity, a new art trail celebrating Manchester’s rich creative culture, featuring mosaics, installations, fine art, photography, craft, and murals by local artists and designers in windows, venues, businesses and spaces across the city.

Launching on 26 October, the event has been created by the team behind the award-winning Bee in the City event, and will transform Manchester into an innovative art gallery taking you on a colourful, inspiring and safe journey around the city streets. The trail will raise money for the artists involved and The Lord Mayor of Manchester Charity Appeal Trust – We Love MCR Charity.

What can we expect? At ChriSalon, Princess Street you might spot Ric Facchin‘s miniature Manchester Builds, which immortalise some of Manchester’s best buildings at their moment in time, whilst Kimpton Clocktower Hotel will display a mosaic work by Mary Goodwin featuring a tryptic of historical Mancunians – famous by name, not so famous by face.

Classic Football Shirts will present mosaicist Mark Kennedy‘s replica of the 20/21 Premier League Manchester City Football Club shirt, the design of which was inspired by his work, and Sarah Connell‘s Manchester cityscapes of the Etihad Stadium and Old Trafford can be seen at Wesley Barrell, both on Deansgate.

Many of the works showcase creativity sparked by lockdown: Sneaky Raccoon‘s work in Hobs Repro, for example, is inspired by the plants and flowers that she photographed while on walks around her neighbourhood, reflecting the sentiment of re-wilding and regrowth.

Others bring a sense of fun and discovery: Playhouse, from Barney Ibbotson Illustration, Ben Clark Design and Playground, shown at Hilton House in partnership with Design Manchester, brings to life some of the entries to a global reaching competition to design something to enable people to play at home during lockdown, and artist and maker Lazerian (aka Liam Hopkins) will present Curiosity Killed the Cat, a conceptual art piece that will morph and change throughout the duration of the project.

Meanwhile, Tim Denton‘s giant drawing pantograph at Dandara Living explores family connections, friendships and other relationships which create the communities we live, laugh, love and work in, and Guy McKinley celebrates humans in all their guises of the present in beautiful colourful stained glass windows at No. 1 Canal Street.

At RNCM, Sumit Sarkar presents a series of sculptures created with a mix of cutting edge digital technology and analogue techniques, taking inspiration from a variety of sources, including religious iconography, science fiction and graffiti.

Large-scale visual artworks will pop up around the city, including a mural of Ste Wing by acclaimed photorealistic street artist Akse, on Little Lever Street, and award-winning photographer Benji Reid‘s work which will be displayed on the facade of the National Football Museum.

Atelier Bebop will take over Selfridges Exchange Square with large-scale graphic work Cosmos inspired by the sunset of summer, and the autumn season, whilst Caroline Dowsett‘s mural at Hatch wraps around the whole inside of its container to create an immersive experience and Hammo has created a sequence of playful little adventurers, clambering over rocks, climbing trees, crossing streams at Ellis Brigham Mountain Sports, Castlefield.

Manchester’s ever-present music influence can be seen in the Moovin’ Festival Visual Art Collective‘s installation at KSMCR which captures some of the festival’s madness and magic, while one of the many pieces at RNCM includes a photography show from the Manchester Hip Hop Archive.

Elsewhere, in the Northern Quarter, artist Lei-Mai LeMaow‘s mural at Yard and Coop takes inspiration from old rave flyers and touches on the current precarious situation regarding the music sector.

Other works challenge us to think. At the Atrium, Library Walk, the Seashell Trust, a national charity supporting children and young adults with complex learning disabilities and communication, has worked with artist Lauren Mullarkey to develop a mixed media sculpture that invites the viewer to consider what safety means and feels like to a blind person, whilst Tara Collette‘s banner installation ‘No one is illegal’, at HOME, is a direct provocation against the treatment of non-white and non-western people and groups in Western democracies.

All pieces on display will be available to buy directly from the artist or maker and the project culminates with an auction on 10 December 2020 streamed live from the Kimpton Clocktower Hotel which will see a selection of pieces auctioned with proceeds going to their artists and makers, and to the We Love MCR Charity. 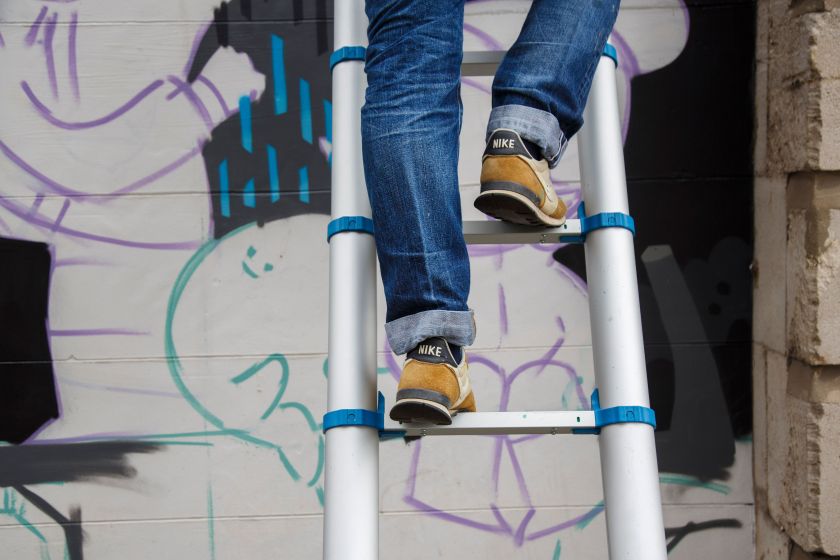 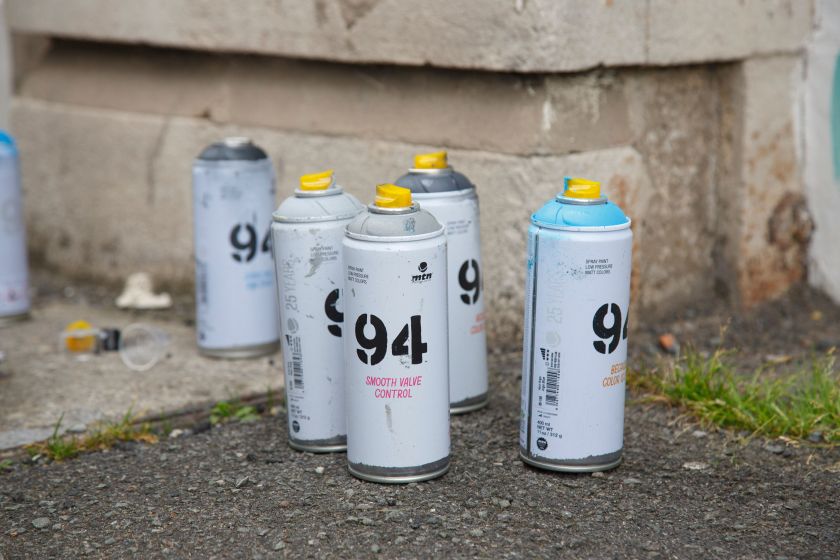 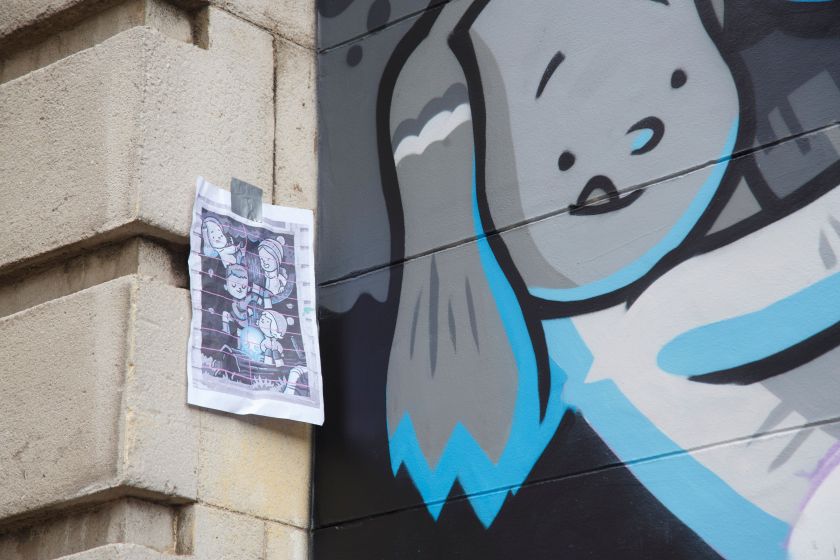 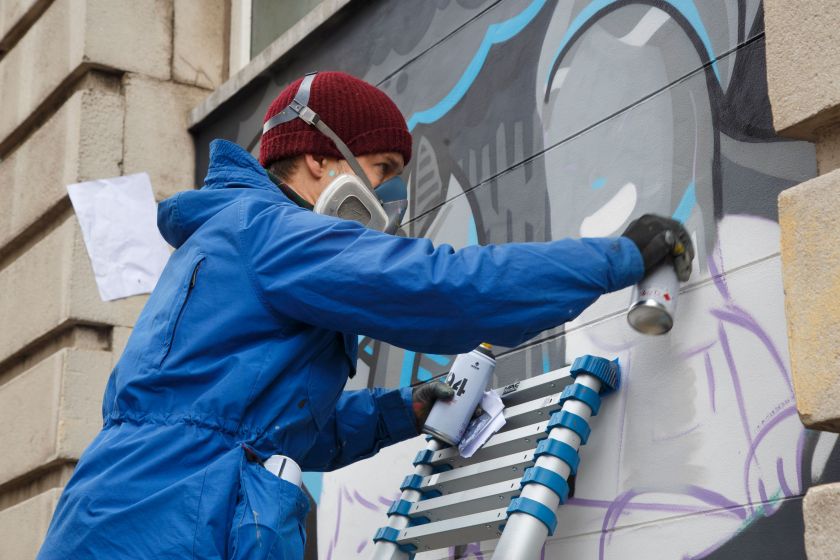 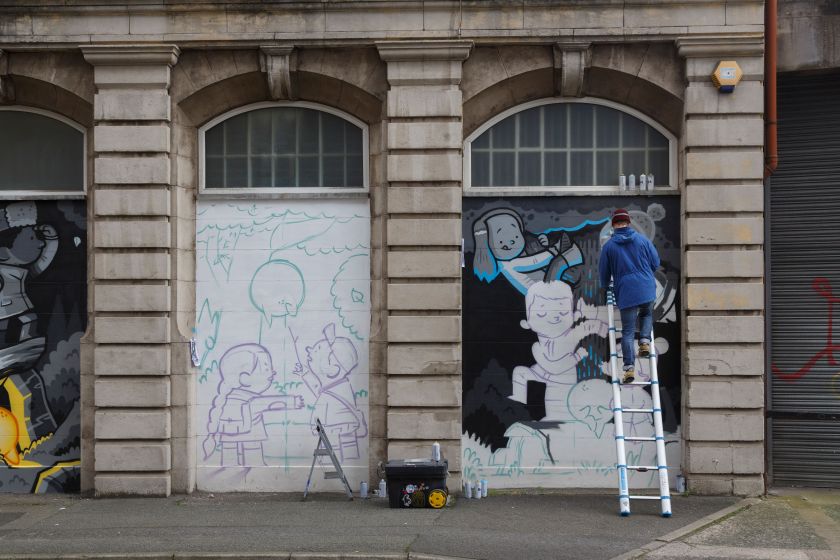 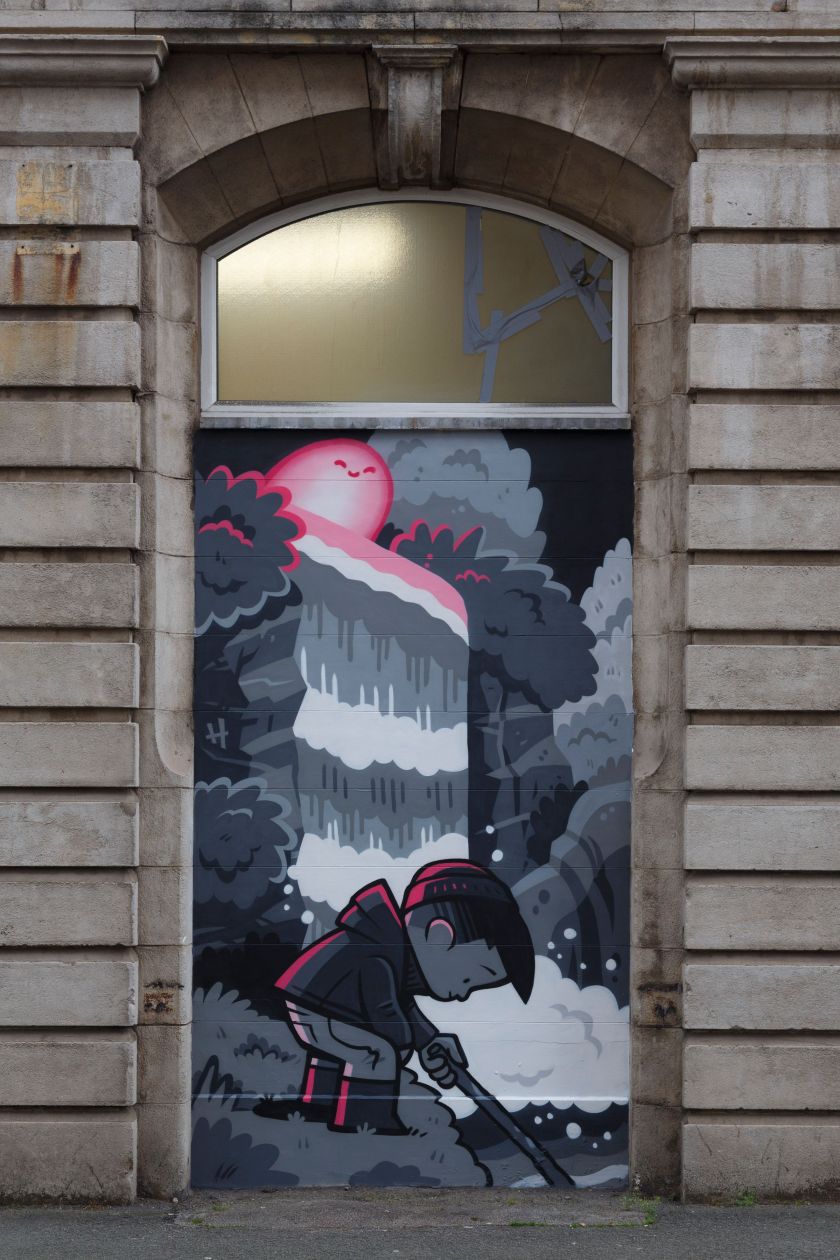 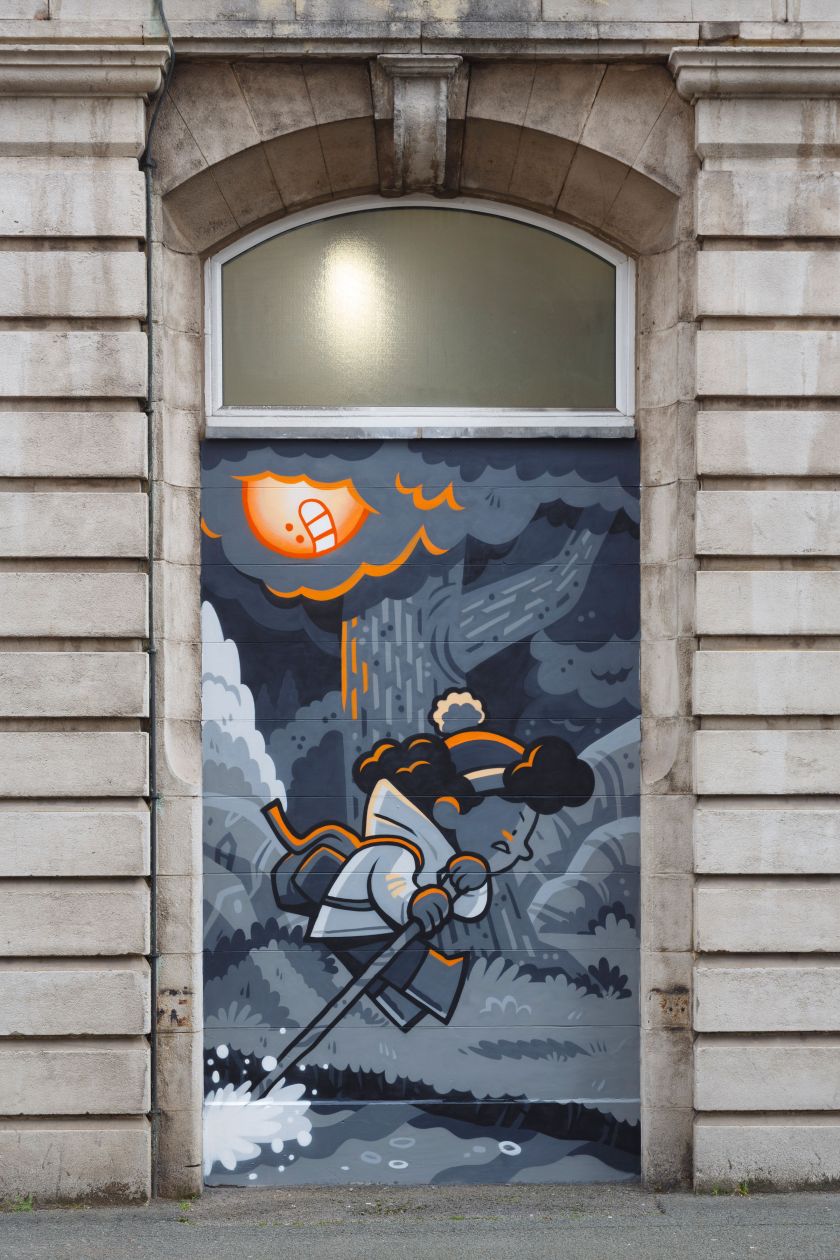 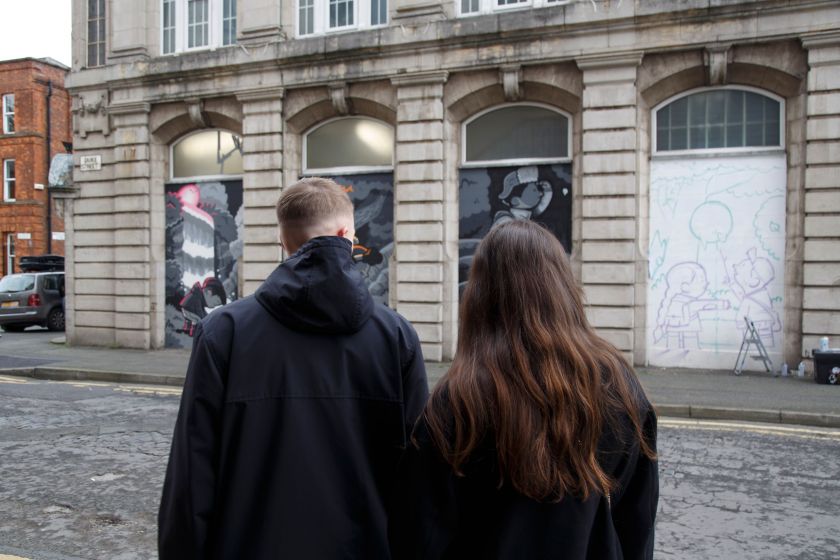