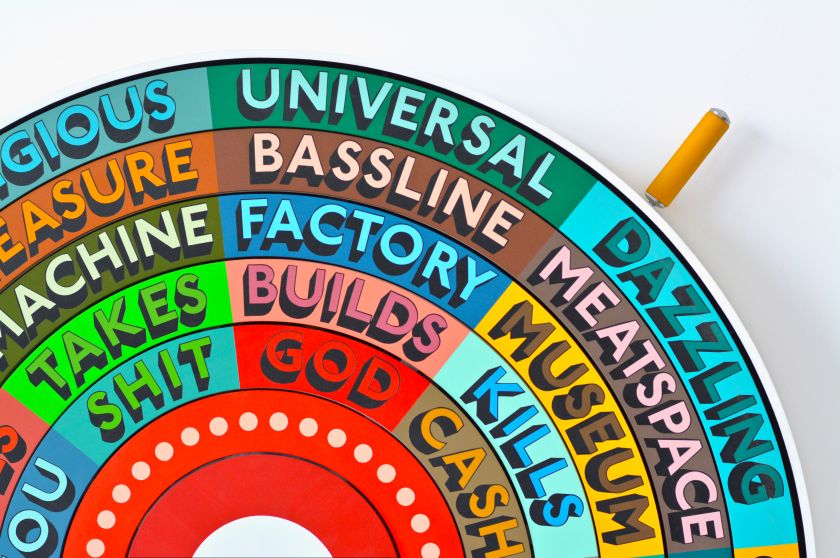 It was in 1920 when poet and artist Tristan Tzara told the world how to make a Dadaist poem using William S. Burroughs’ ‘cut-up technique’ where written text is cut up and rearranged to create new text. Those instructions have since inspired London-based artist Tim Fishlock‘s latest work: a colourful, interactive ‘hand-cranked’ generator of five word slogans.

Called The Poem Will Resemble You, the psychedelic work brings to mind the classic fairground wheel of fortune and comprises six concentric rings that spin independently of each other. Five of the rings are divided into eight hand-painted segments containing a single word. A sixth, central ring is decorated with small circles to accentuate the Op art nature of the piece.

To operate you pull on the leather-bound lever positioned on the side of the artwork, which engages the internal mechanism and sets all six wheels in motion. Spinning at different speeds, the effect is discombobulating, as if one were on a dizzying ride at the funfair. Each spin of the wheel results in the random generation of eight five-word slogans or phrases when read from the outer ring to the centre. Amazingly, there are 32,768 different permutations of these slogans.

“In an era when attention spans are short and brevity is king, I’ve been working at saying as much as possible with as few words as possible,” says Tim. “Aware that this approach can become a potential creative cul-de-sac, I discovered for myself the lyrical power and shift in consciousness that can be achieved by subverting the normal word order and its semantic meaning. It’s an impersonal method of inspiration and invention. As William S. Burroughs put it, ‘You cannot will spontaneity but you can introduce the spontaneous factor with a pair of scissors’.”

Careful consideration was given to the selection of words, which, like much of the artist’s work, allude to a fairly misanthropic, dystopian worldview – think ‘Meatspace’, ‘Kills’ and ‘Shit’ to get started. This makes a striking contrast between the subject matter and material form that is synonymous with TV quiz shows and funfairs. “For Fishlock,” says the Gallery, “words and the glyphs that form them are a constant source of joy. The message can often be dark and misanthropic, but the method of delivery is always dazzling and playful.”

For anyone curious to see Tzara’s original instructions, they read as follows: “Take a newspaper. Take a pair of scissors. Choose an article as long as you are planning to make your poem. Cut out the article. Then cut out each of the words that make up this article and put them in a bag. Shake it gently. Then take out the scraps one after the other in the order in which they left the bag. Copy conscientiously. The poem will resemble you.”

The Poem Will Resemble You by Tim Fishlock will go on display at London’s Hang-Up Gallery in Hoxton next month and will also be available to view online via the newly launched Hang-Up website from 1 November 2020. 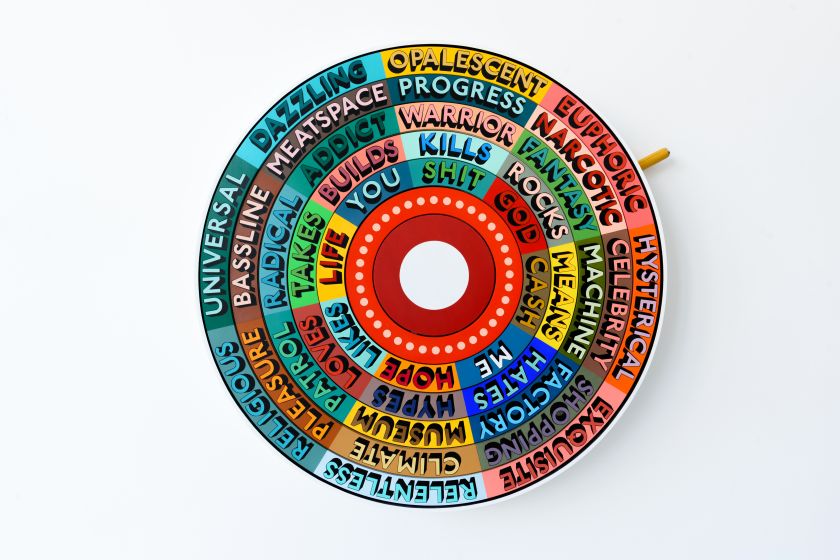 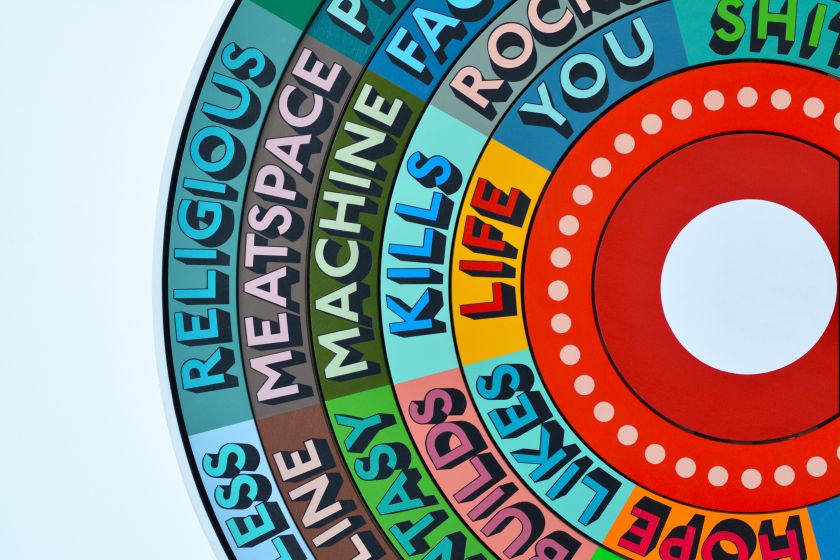 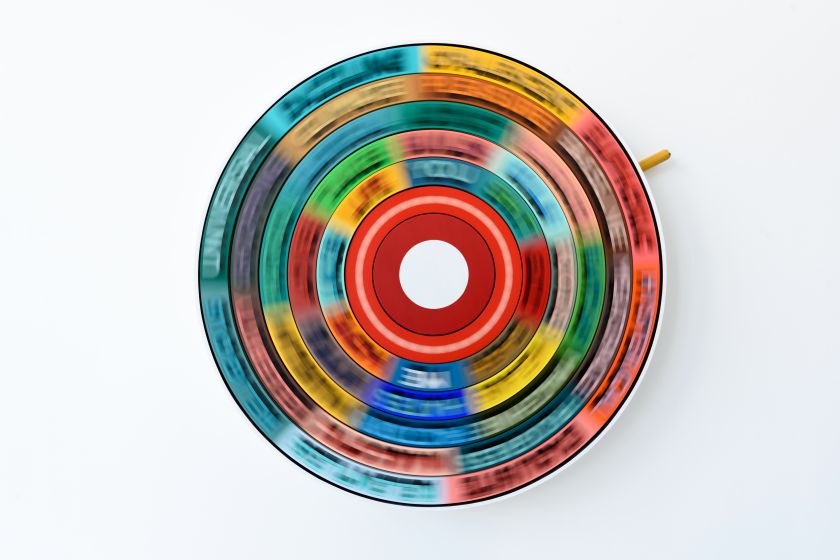 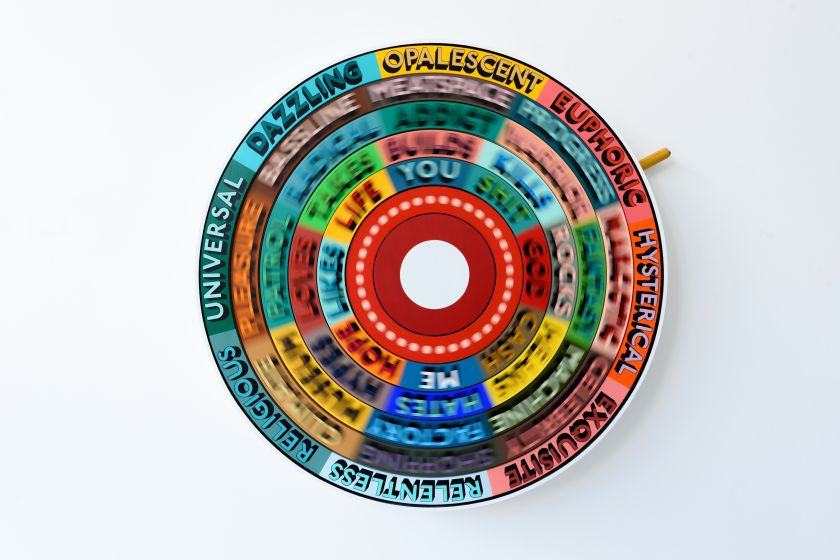 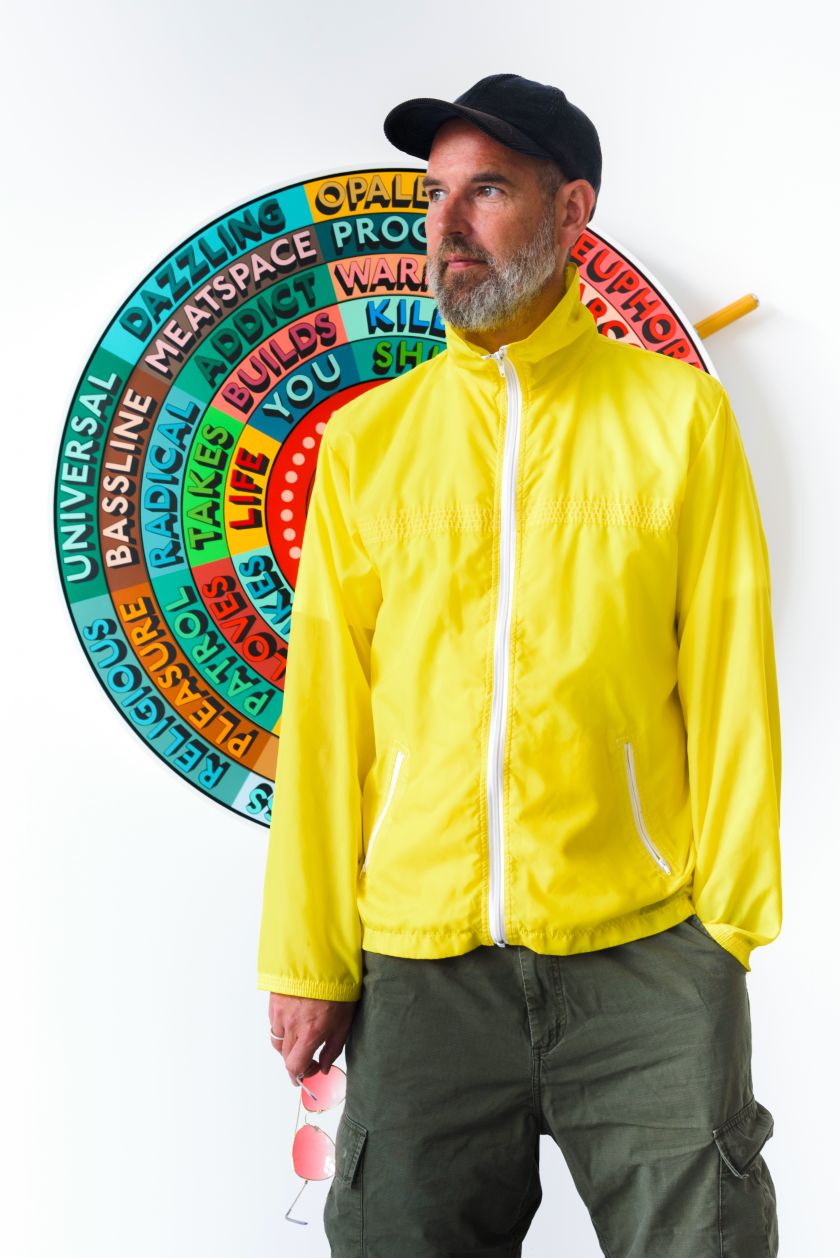