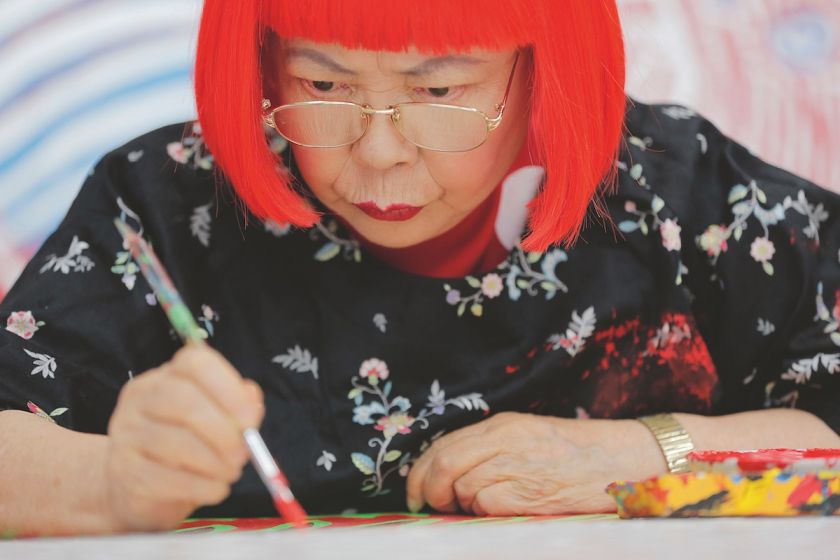 A new book in publisher Laurence King’s Lives of Artists series is published later this month, detailing the incredible life of Yayoi Kusama. Out on 22 April 2021 and written by Robert Shore, the book takes a closer look at Kusama’s personal story and her work and proves there’s a lot more to her than her reputation as the “the queen of polka dots”, as the publisher dubs her.

While her work is immensely famous and recognisable – and certainly no stranger to Instagram feeds the world over – less is known about her fascinating and frequently challenging life. Shore’s book manages to weave this into a pocket-sized tome; going into depth on topics including her difficult childhood in Japan, “her wild-child years” in 1960s New York, her mental health struggles and her voluntary internment in hospital, as well as her stature today as a bona fide art world superstar whose shows attract the highest visitor numbers of any living artist.

Laurence King has kindly given us permission to republish an extract from the book, drawn from the chapter titled ‘Boats and Other Phallic Symbols’. 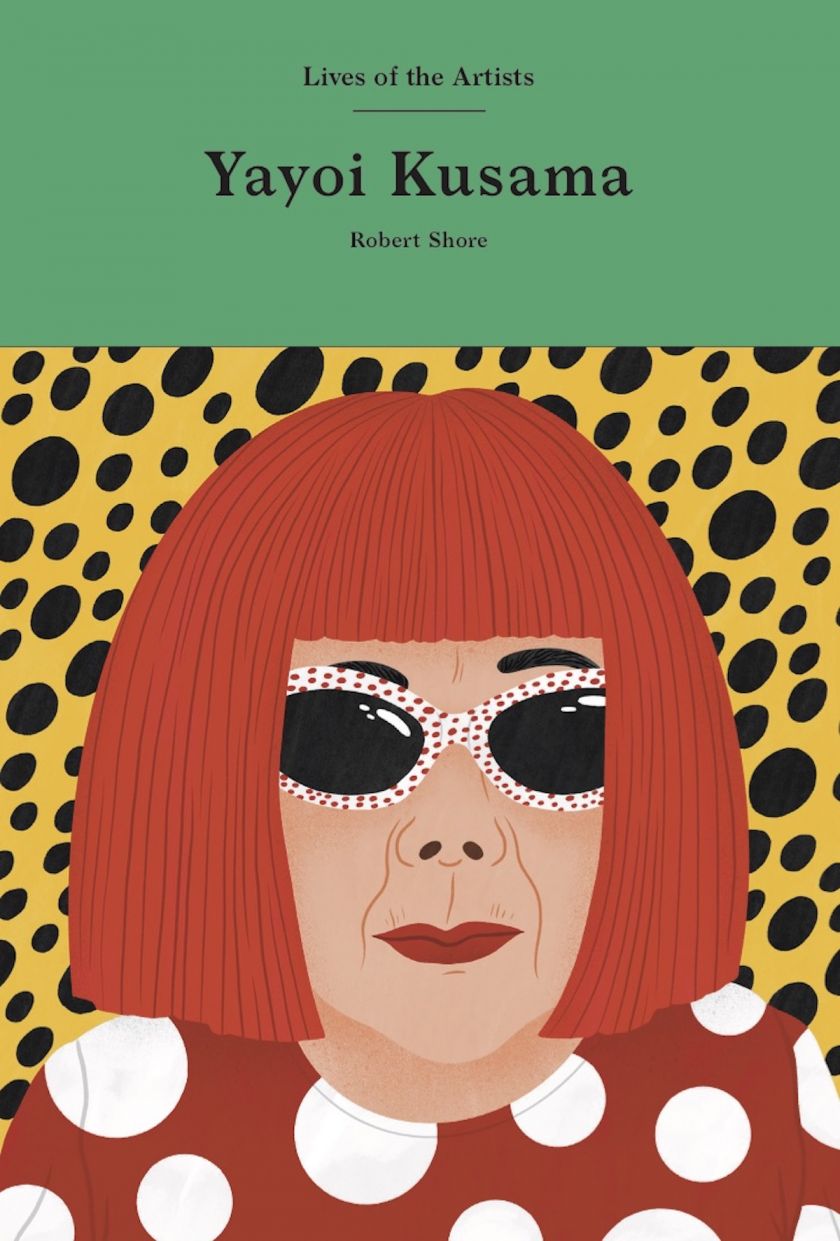 “Kusama’s East 19th Street studio was located above a fabric shop, and tellingly her move there coincided with a radical shift in her practice, as she now began to make fabric sculptures. Perhaps part of the inspiration for this new departure also came from her wartime experiences in Japan, when she had been conscripted to make parachutes for the Japanese air force. Not that that explained the formal qualities of the stuffed protuberances, which were suggestive of phalluses. ‘I began making penises in order to deal with my feelings of disgust towards sex,’ Kusama later recounted. ‘…It was a kind of self-therapy, to which I gave the name “Psychosomatic Art”.’ But, as Mignon Nixon has noted, these objects also seemed to be ‘offered up in a parody of the phallic hyperbole of the atomic consumer age’.

“Like the activity so central to their production, sewing, many of the objects Kusama chose to cover with the fabric sculptures were traditionally associated with the female domain: a spoon, a spatula, a pan, an ironing board, women’s high-heeled shoes. In this way, as Midori Yoshimoto has commented, she ‘castrated the power associated with the phalli, turning them into benign elements that decorate women’s domestic space.’ Accumulation No. 1 and Accumulation No. 2, respectively, an armchair and a couch coated with phallic protrusions, made their debut in a group show in 1962 in an important new space for emerging artists, the Green Gallery. Featured alongside Claes Oldenburg, George Segal, James Rosenquist and Andy Warhol, Kusama was in excellent avant-garde company for what turned out to be one of the landmarks – ‘ground zero’, as Kusama put it in her autobiography – in the advent of the Pop Art movement.

“Another Green Gallery group show featuring Kusama followed in January 1963. The other artists in New Work Part I again constituted a roll call of rising art stars, including Dan Flavin, Lucas Samaras, Larry Poons – and her friend Donald Judd. Kusama wrote a long letter to Richard Bellamy, the Green Gallery’s director, to persuade him to give her a solo show. He did not immediately agree (although he did at one point offer her representation), so she began to explore the possibility of renting a loft space where she could mount her own exhibition—an Accumulation Room filled with protrusion-covered objects. As she informed her old ally Beatrice Perry, she had in mind something along the lines of Claes Oldenburg’s The Store, a shopfront he had opened on Manhattan’s Lower East Side in 1961 to sell his unconventional work—slices of pie fashioned from painted plaster and so on—in a very un-gallery-like manner.

“Some relief was afforded Kusama when she was finally granted permanent residency rights in May 1963. That at least resolved one source of status anxiety for her. But another—her position within the art world and representation by a gallery—remained. Beatrice Perry had been trying to establish a New York space for the Gres Gallery—which might have been an ideal home for Kusama—but this possibility now began to fade.

“Not that Kusama was put off. As well as heroic productivity, she demonstrated remarkable fortitude and strength. ‘She was tiny but macho,’ one friend later recounted and unstinting in her pursuit of new contacts. Carolee Schneemann recalled attending a gallery opening, and Kusama asked her to point out the important men in the room. She was, said Schneemann, ‘blatant and aggressive and overt’ in her pursuit of patrons. Obviously successful too, since at the next opening, she was accompanied by one of the people Schneemann had pointed out.

“Kusama now met gallerist Gertrude Stein, who offered her a spot in a group show at her East 81st Street space in October and then, in December 1963, staged the first solo show of Kusama’s new Accumulations era. Approached via a dark corridor, Aggregation: One Thousand Boats Show consisted of a room centred on a nine-foot-long rowing boat covered in soft phalluses. The boat was an item of street salvage retrieved by Kusama with the help of Donald Judd, who also served as Kusama’s assistant in the onerous task of stuffing sacks to make the protuberances.

“The surrounding walls, floor and ceiling were papered with black-and-white photographic reproductions of the boat—999 images in total. The effect of such an accumulation of sameness in a small, enclosed space was both hypnotically oppressive and strangely lyrical, as Brian O’Doherty noted in his New York Times review. Aggregation: One Thousand Boats Show was, he said, a ‘genuine, obscurely poetic event [that] should not be dismissed as a surrealist caper. Kusama has produced an object and an environment that is weirdly moving.’

“Kusama asked Rudy Burckhardt, who had famously documented Jackson Pollock at work at the start of the Abstract Expressionist revolution, to photograph the exhibition. The results included a shot of the installation with Kusama standing inside it, naked, with her back to the camera but her head half-turned to the viewer. Was this intended as a feminist statement, a rejection of the (male) gaze? It was extremely unusual for an artist to choose to be photographed in this way, but the intensity of Kusama’s look turned the scenario, as Alexi Worth put it, from a ‘frivolous Surrealist premise (Playmate in Penisland) into something unexpectedly sombre and unsettling’.

“Photography was a key tool in allowing Kusama to construct a distinct artistic persona for herself. The images produced at this time drew a great deal of attention because Kusama appeared naked in some of them. But in truth, Kusama had been keen to place herself physically, and by extension spiritually, in the middle of her works from the outset. As Laura Hoptman has noted, there is a parallel with Piero Manzoni here. Like her Italian peer, Kusama considered herself a living work of art and promoted herself as such so that the photographs she commissioned should by rights be considered as more akin to artistic self-portraiture or performance documentation than publicity images. Researchers trying to locate photographs of particular Infinity Net paintings may struggle to find ones in which the artist is not featured above, below or in front of the works in question.

“Kusama early on developed the habit of dressing in clothing that matched or helped her merge with the work she had created. When she began making collages and montages early in the 1960s, she would integrate photographs of herself into the works. There is a highly unusual double exposure image in which a full-length portrait of the artist is blended with a negative image of an Infinity Net so that the artist is subsumed into the pattern she has painted: ‘the merger between artist and work of art is complete,’ Hoptman concludes. Or, to adopt the artist’s own terminology, Kusama self-obliterates in the work.”