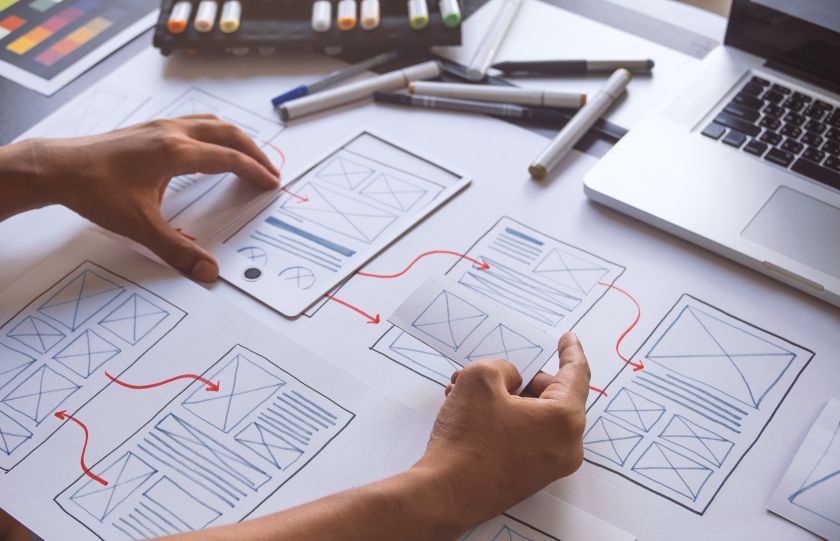 “What career can I study that’s future-proof?” With everything from lockdown to the rise of AI threatening previously stable professions, you’re right to ask that question.

But if there’s one area that certain to remain in demand throughout the 2020s and 2030s, it’s UI (user interface) design and UX (user experience) design.

Quite simply, as the world makes more and more of its activities digital, there’s going to be more and more demand for digital designers. And right now, the current work climate for UI and UX creatives couldn’t be more positive.

Just glance through the job listings, check out some of the impressive salary offers around such positions, and you’ll soon see what we mean.

Created, an online academy offering hands-on training in UI and UX, knows a lot about this topic. So we’ve teamed up with them for this article, looking at why it’s the right time to learn digital design and how to go about it.

Who needs UX and UI design?

Right now, the question isn’t so much ‘Who needs UX and UI designers, as who doesn’t? After all, the world’s biggest companies are essentially now all technology companies.

That includes the most obvious tech names such as Google, Amazon and Apple. But it also includes companies working in retail, construction, finance and more.

In short, whatever sector you’re in, if you don’t have a digital strategy, you don’t have a future. So all these corporations are looking beyond the standard graduate intake to find the very best digital talent. At the same time as a million startups are snapping at their heels and competing for the exact same people.

What do UX and UI designers product?

The most visible work produced by UI and UX designers is usually well-known apps and websites. And there are certainly a lot of those right now.

Need a cab? Then you call an Uber. Want a takeaway? You dial JustEat. Sending a card? Then Moonpig. And each of these services doesn’t just need a customer-facing app but a complex digital network that connects together all of its drivers, delivery staff and suppliers too. All of which requires UI and UX designers to create.

Salaries obviously vary according to location, level of experience, and the amount of competition for roles. But for example, a starting salary of around £25-30K is common for a UX designer in London right now, while a senior UX designer can expect to earn around £60K. You certainly won’t need to starve for your art.

Why you should learn UI and or UX design

But while the money’s useful, that’s not the only reason why creatives should learn UI and UX design. The main one is that it’s fulfilling work, which stretches you creatively. You’re normally part of a team pulling together to create something special that enriches people’s lives. And who wouldn’t want the sense of satisfaction and achievement that comes from that?

If you’re a designer steeped in print, it’s a great way to update your skillset for the 21st century and open you up to a new world of possibilities. If you’re new to design, then it’s the perfect jumping-on point, maximising the number of opportunities you have to develop your career. And if you’re another type of creative – an illustrator, 3D artist or animator perhaps – it’s a great way to change things up and pursue a new direction that harnesses and builds on all of your existing skills.

How to learn UI and UX design

It’s perfectly possible to learn some technical skills, such as how to use Photoshop, from YouTube videos and online tutorials. Training in UI design and UX design, however, is a lot more involved. And so it’s definitely recommended that you follow some kind of formal study. That’s going to cost money, of course, but given the eventual financial rewards, it will certainly be money well spent.

University courses in UX and UI design do exist, as well as broader design degrees that include modules on these topics. But in all honesty, this isn’t usually the best way to go. A three-year course is a huge chunk of time to take out of your life. Plus, much of what you learn will likely be out of date, as traditional institutions aren’t generally the best at keeping up with the latest fast-moving tech developments.

Instead, we’d recommend you save on the time and expense of a full degree by focusing your energies instead on a course with Created Academy.

Created is a new kind of online academy, one that’s committed to giving you the kind of skills creative people need to succeed in the real world.

That means you’ll learn both the technical skills of UX and UI design and the more subtle “soft skills”, like empathy and collaboration, that will help you stand head-and-shoulders above rival job candidates.

It means you’ll spend most of your time working on hands-on client briefs, rather than theory, making you much more employable and helping you build up an impressive portfolio. Along the way, you’ll get feedback from real-world professionals to keep you on track, as well as working, supporting and collaborating with other budding creatives.

Taking place entirely online, Created’s Foundation and Pro courses are the ideal way to get started in UX and UI design. Find out more at created.academy.