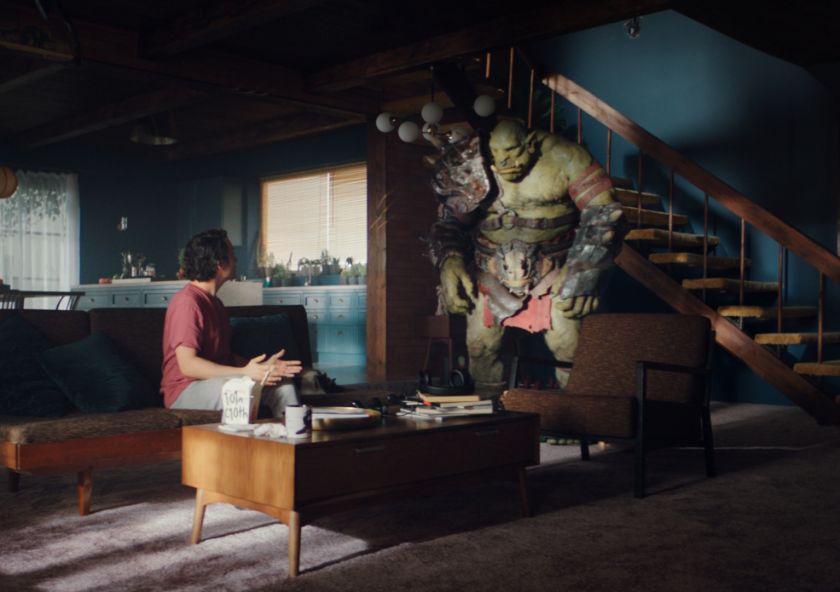 It’s been a long time since we enjoyed the tender bromance unfold between Frodo and Samwise – a story of loyalty and friendship like no other. Now Elijah Wood is back in a similar fantasy world but this time, he’s been caught cheating on a giant orc called Uzgahk.

It’s part of a new TV campaign by Lilith Games called ‘Cheat on your RPG’ for its hit mobile role-playing game, AFK Arena, created with Wieden+Kennedy London. Starting today and running across a series of spots to be revealed in the coming weeks, fans can watch Elijah discover the enticing joys of Lilith’s new hit game, and his attempts to fool around with it behind his old game’s back.

Because the problem is he’s still in a relationship with his old role-playing game, represented here by Uzgahk the Orc. “Realising that he can get all of the depth and strategy of his favourite game, but still earn amazing rewards while not playing,” explains Wieden+Kennedy, “Elijah is powerless to resist AFK Arena’s newfound charms. This obsession results in him sneaking off to enjoy private moments away from Uzgahk who increasingly comes to realise that he’s being cheated on.”

The films, which are running across TV, online and social, are directed by Nick Ball, produced by Blink, with VFX from Untold Studios and sound by 750MPH.

As a long-time gamer, Elijah’s passion has seen him give his voice to multiple video game characters and work as a game producer. He is now proud to be part of the world of AFK Arena, saying: “Just when I thought I wouldn’t encounter another orc, here I am playing a version of myself that’s stuck in a love triangle between a needy orc and a casual mobile RPG game, AFK Arena. Surprisingly not the weirdest thing that’s happened this year.”

Hollie Walker and Cal Al-Jorani, creative directors at Wieden+Kennedy London, add: “The idea of cheating on your needy old RPG with something newer and y’know, more casual, felt like a very fun story to tell. I mean, who doesn’t want to see a lumbering Orc get his heart broken by Elijah Wood in favour of a shiny new mobile game?

“Nick Ball and Untold brought this unlikely love triangle to life brilliantly. So sit back, buckle in and get ready for a snotting heartbroken Orc to fill your screens.”