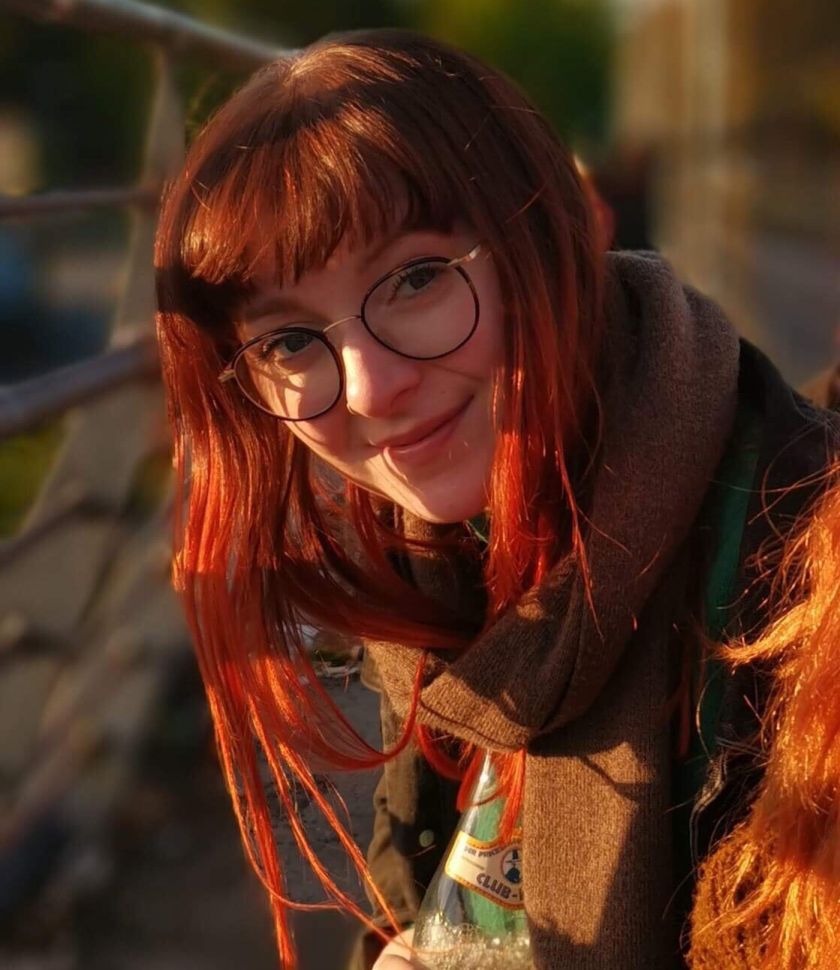 Ellice Weaver is a British illustrator and comic artist most recently based in Berlin. She studied illustration at The University of West England and graduated in 2015, going on to work with clients such as Vice, The Daily Telegraph, Soho House and more.

The artist likes to play with unusual forms and perspectives, her figures like funhouse mirrors. A few years ago Ellice released her first graphic novel Something City, whose intimate realism showed another side to Ellice’s talents. The book received Best Indie Comic of 2017 from Pipedream Comics and the Breakout Talent award from Broken Frontier.

Now back in Blighty, we caught up with the creative for a chat on all things Brexit, Berlin, boats and Beverly Hills housewives. Moving around in a time of upheaval whilst choosing different places to call home, Ellice’s life is as adventurous as her illustrations.

You’ve returned to the UK – welcome back Ellice! What brought you to Berlin in the first place?

I chose a really good year to move back, huh? I moved to Berlin to be with my partner who’s from Germany. My plan was to go for five months but I ended up staying for almost five years and it became a really special place for me.

When I realised I wanted to stay longer my plan was to work as hard as possible to become an illustrator and to put off getting a side job for as long as possible. I made commissioned Harry Potter-themed portraits in secret on the side to get by until I started getting regular illustration work. I also lived in a van; luckily I slept in my studio during winters and at my partner’s parents house. It was so fun and also at times very uncomfortable.

Why the return home?

Brexit…ish! It’s the main reason we moved in the middle of a global pandemic. When freedom of movement was a thing I felt like I would stay in Berlin forever, but as the Brexit deadline came closer I started to feel like the window of opportunity was closing. 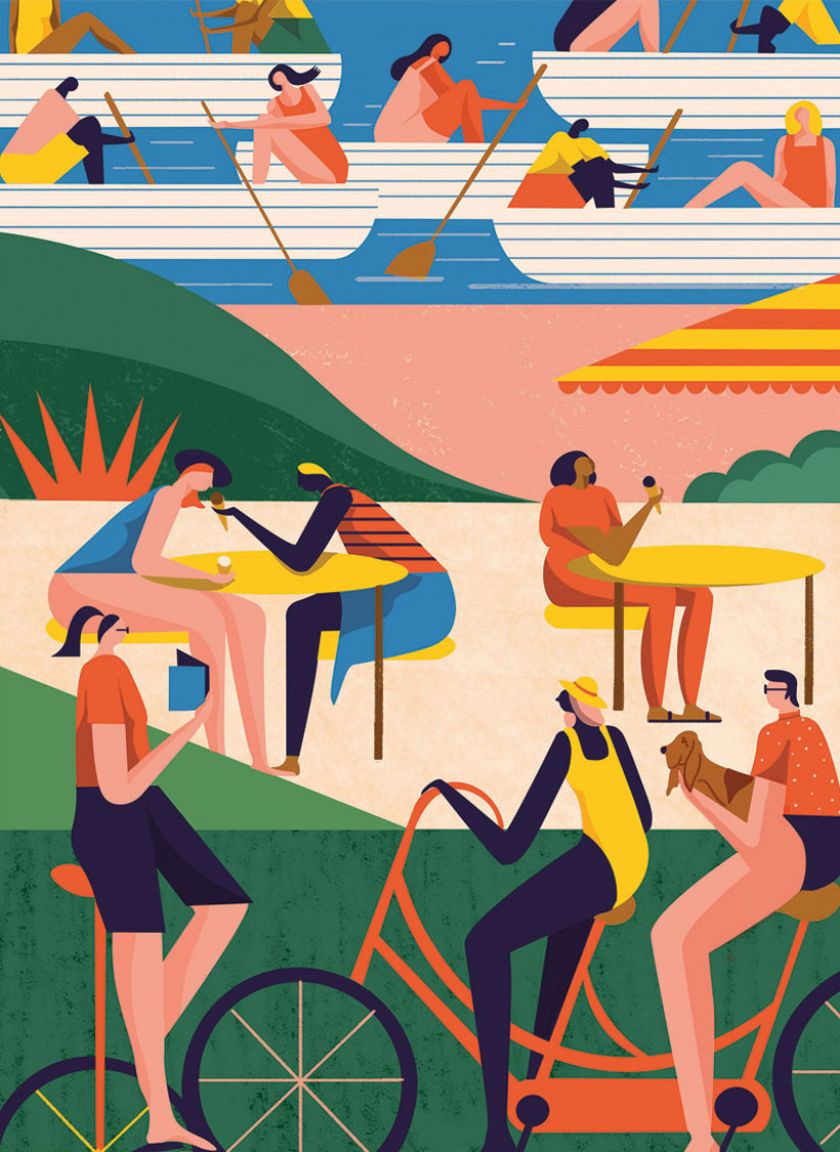 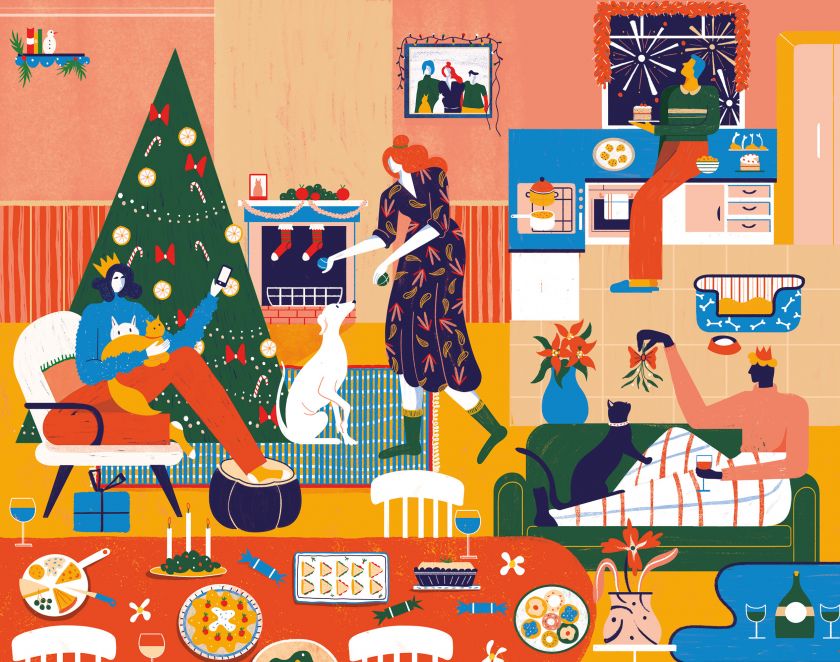 I wouldn’t have thought so much about it if it was just me but it seemed like it might get more complicated to live in the UK after Brexit with my German boyfriend. I had to really ask myself if I actually could stay in Berlin in a more serious/permanent way. It’s been a hard decision, but the UK is starting to grow on me.

Is it true you’re living on a boat? Tell us more!

Yes! It’s very cosy. Last night there was ice on the outside of the boat and we blasted the heating and did lots of drawing. We bought it without seeing it (abroad), arrived in the UK and realised how much work needed to be done.

We’ve been doing it up since we got here in August. It’s almost finished, and I’m happy to report the leaks are almost fixed. The thought of living on a boat made the return home sweeter and it’s really fun.

How have you found the last 12 months? Been quite charming, hasn’t it!

Big ups and downs. Work-wise I’ve managed to stay quite busy throughout. I had a dip during the autumn but other than that it’s been smoother than I thought. I started the year in Morocco; I had never left Europe and we set aside three months to go.

We left a couple of days after Christmas; at that point, there weren’t any cases in Morocco so we didn’t think about going home. Everything got serious quite fast and when cases started to rise in Europe, Morocco acted super fast and closed the borders whilst we were still there. We spent a week scrambling to get back. We were the idiots on holiday everyone saw on the news during Covid-19.

Seeing a different country react during this crisis was really surreal. After arriving back in Germany we decided to move to the UK. Before the second wave came we drove straight to the UK without making any fun stops. Now it’s been a whole lot of staying home.

What’s been keeping you going?

Keeping Up With The Kardashians! I’ve watched the series in one single year. I can’t believe it: 19 seasons! I did it whilst drawing which maybe makes it better. I really never saw myself caring about a show like the Kardashians but with all social contact limited to the bare minimum I was really relying on them to get me through. It was like a massive hang out and it actually made me realise how much I love people, friends and socialising so I’m crossing my fingers for a near future where I can prioritise that.

I should mention for transparency that I also watched the entire season of The Real Housewives of Beverly Hills this year, too. 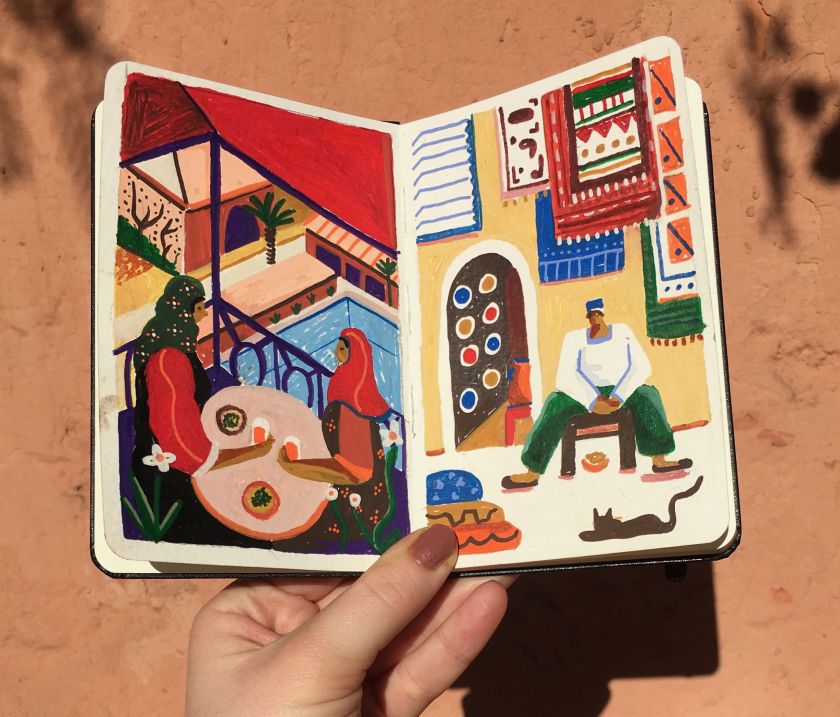 It’s been a couple of years since we last spoke. How has your art evolved during that time?

When we first spoke I was just starting out and still trying to find out how I wanted to work. I’ve become comfortable working in a more graphic way. I’ve managed to get a lot of professional experience and have grown in collaborating with clients.

I feel like the work itself is still changing, which is such a lovely thing about being an illustrator. You can just keep pushing it until you’re happy with it. Sometimes you feel great about what you’re doing and sometimes you feel like scrapping everything. 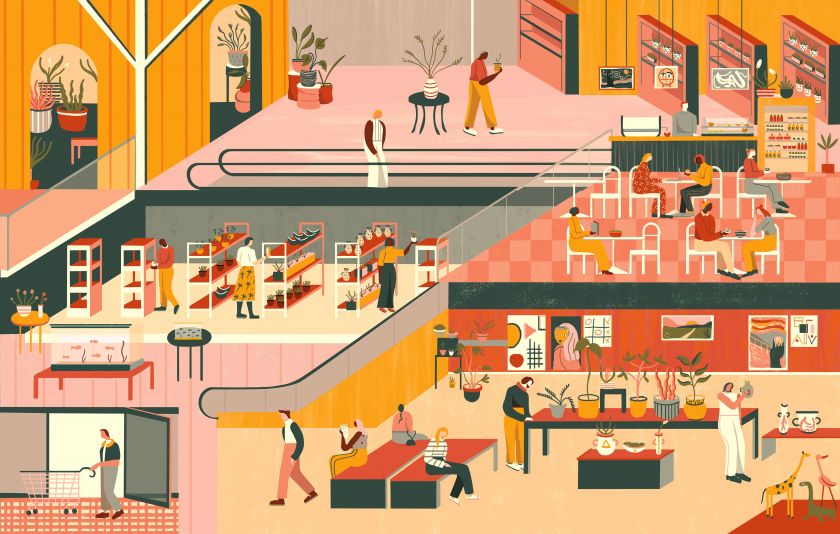 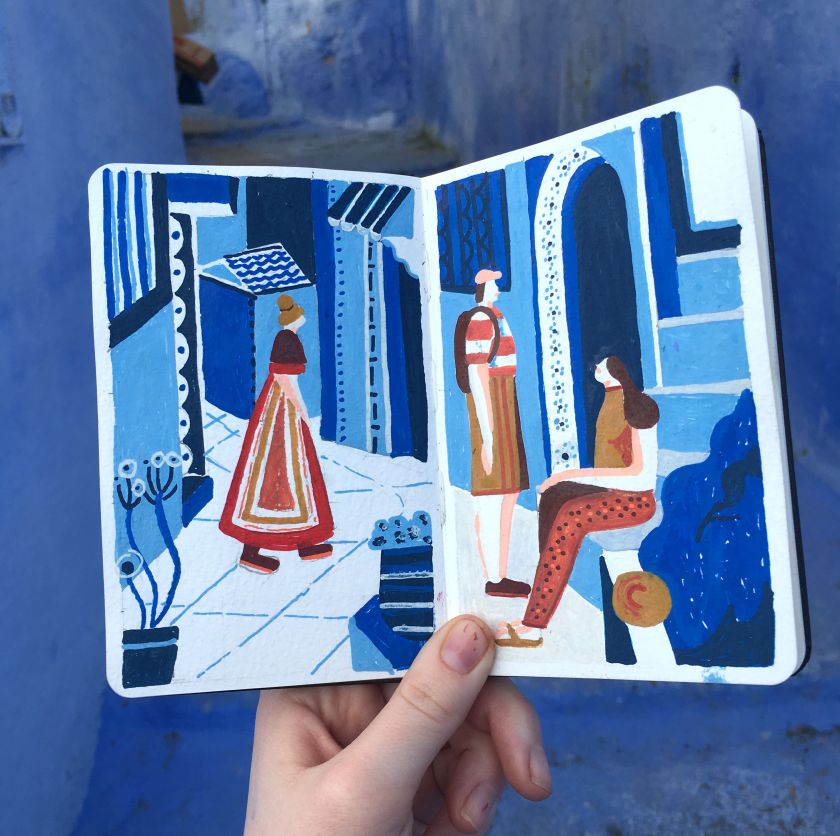 Talk us through a recent project you’re proud of. We loved your work for the New York Times and HP.

Thank you! T Brand Studio is the brand marketing unit of The New York Times, and they created an article with HP about collaborating from home during the lockdown. It was definitely something I could dive into because I was also trying to collaborate from home.

I was asked to make three illustrations around the topic. This year I noticed for a lot of my jobs I was given a colour palette. I think having to adapt to colour palettes has made me feel more relaxed around colours and has pushed the colour choosing process.

Is it more competitive now as an illustrator?

I’ve been freelance for two years now so I don’t have a lot of years to compare it to. Since returning to the UK and looking at it through the eyes of someone who’s freelancing here I realised just how much illustration there is out there. Everything is illustrated! So yes, it’s competitive, but if you look at how much design there is out there then you can also see the huge market.

Are there any dream projects you’ve yet to take on?

A full packaging brief including boxes, wrapping paper, ribbons and a store window to go with it. In the store window, I’d like to make a little cut out town scene with very fashionable characters. Maybe around Christmas time.

Your website has a new yet old-school looking section called Sketchbook. What’s that about?

I really needed a screen break. After I made the jump to fully digital I definitely felt like something was missing. I think when you’re an illustrator you get really used to only drawing for a reason and often with direction. My sketchbook is separate and it feels good to make a self-indulgent painting every once in a while.

I love being in a new place and recording it in my sketchbook. When I was in Morocco (before everything turned upside down), I travelled around with my sketchbook and it was one of the best things I’ve ever done. 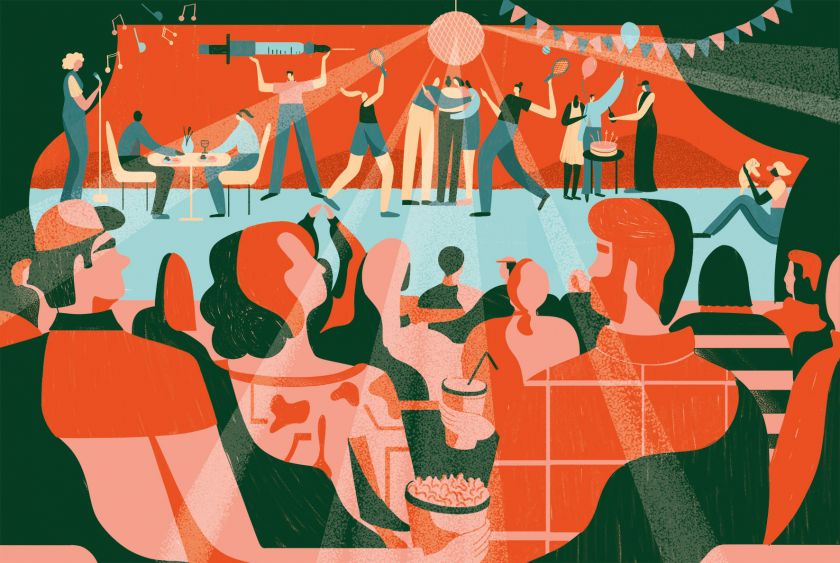 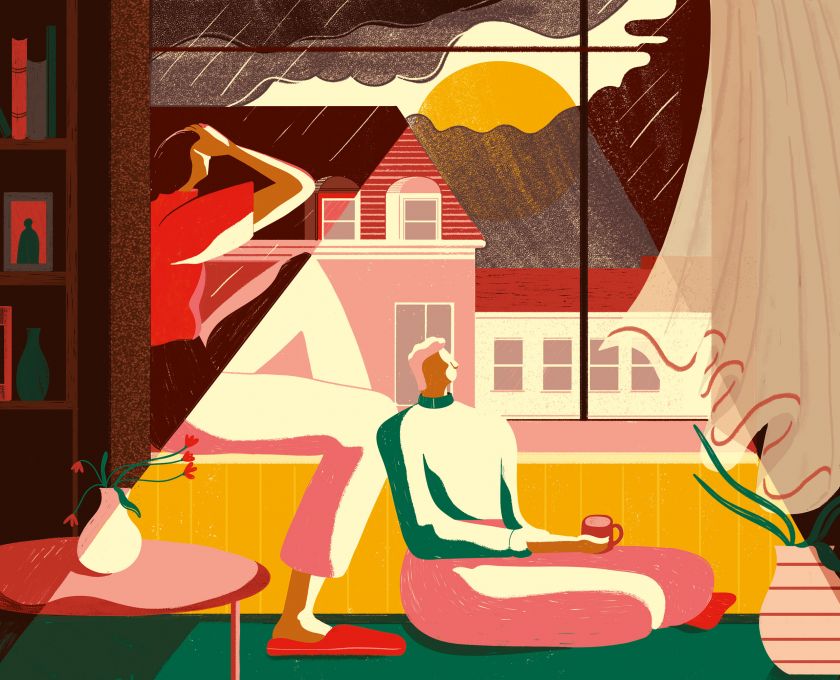 We’ve all learnt something about ourselves following the events of 2020. What have you discovered about yourself?

Does it count if we’ve learnt something but still haven’t addressed it? Haha! I’ve learnt that I’m really good at staying in my comfort zone and I’ve discovered it definitely stops you from growing.

At the end of last year, I got an opportunity to fly to Australia to do a live drawing event with a beer company for the Australian tennis opening. It was such a dream job but I turned it down mainly because of Imposter Syndrome and because it felt too unknown. Of course, I really regret not going.

I hope the next time something like that happens again (hopefully) I’ll say “Whatever, I’m going”, even if it does make me feel uncomfortable. 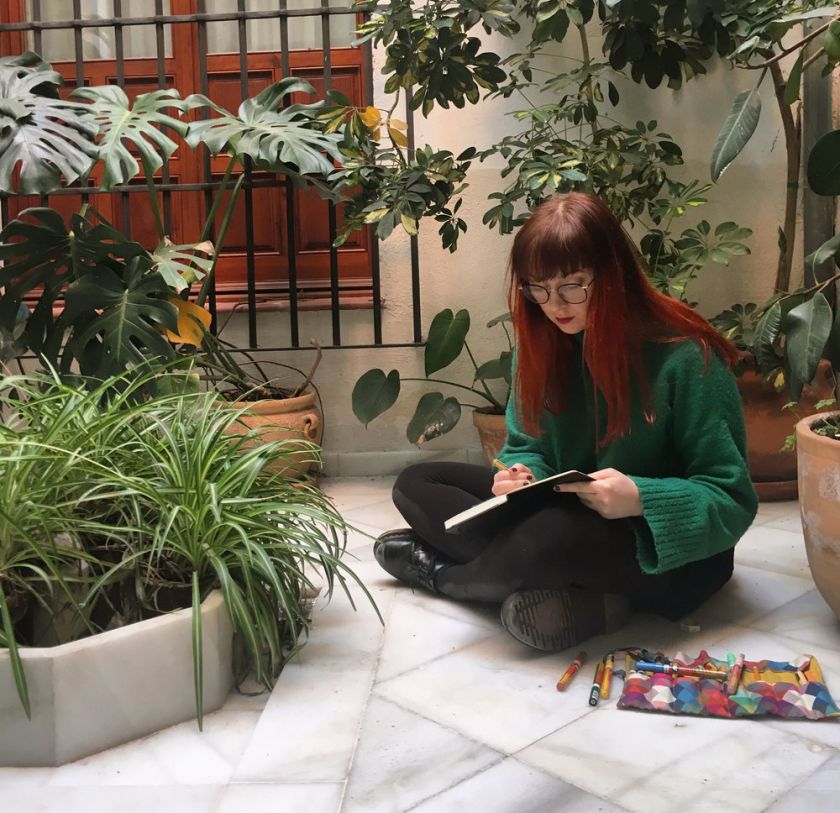