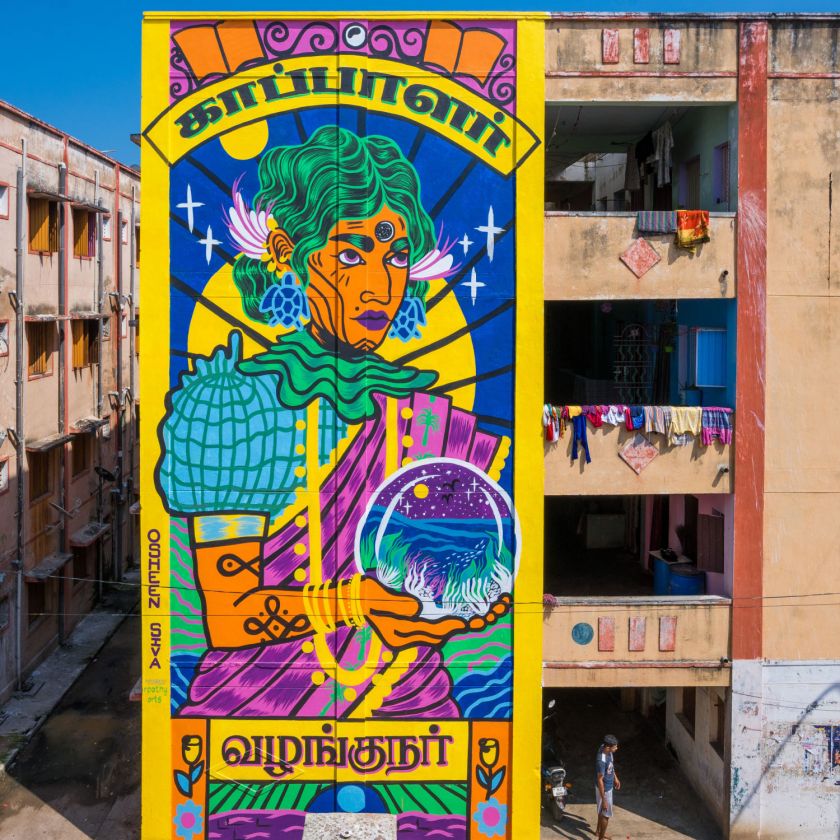 Osheen Siva is an illustrator and muralist based in Goa, India who loves to explore themes of femininity, sexuality and the “representation of the marginalised in the Indian context”.

Through surrealism, speculative fiction and science fiction, and with designs rooted in mythologies and her Tamilian heritage, Osheen imagines “new worlds of post-colonial dreamscapes, futuristic oasis and narratives of feminine power generally lacking in popular art and culture”.

Having grown up in a mixed environment between Taiwan, China and India, her works strive to decipher the question of identity and belonging. Osheen experiments with digital as well as traditional mediums and her recent clients include The New Yorker, Vans, Converse, Levi’s, and Verve Magazine.

We love her recent poster design to highlight Menstrual Hygiene Day 2020, nodding to the Hindu pantheon, Kali – the goddess with many arms, usually carrying a sword and a severed man’s head – in this case, the sword becomes a menstrual cup (because what else does a girl need?). Describing the work, Osheen says: “Kali is one of the most eminent goddesses in Indian mythology and is considered to be a strong mother-figure and symbolic of motherly-love. Kali also embodies ‘shakti’- feminine energy, creativity and fertility.”

There’s also her gorgeous typographic-led zine on How to Deal, that is “with the sticky situations of the mundane everyday”. Not something we’d have thought entered her mind when browsing through her latest work.

Recent murals include Providers & Protectors, a mural in Tamil for St+art India Festival Chennai 2020 – it’s a homage to the “dual role women play in the sustenance of an economy – both as providers and protectors of households and society,” Osheen says. And there’s a mural made during the Museum Next Door residency at Jeju Island, South Korea, “The artwork was solely inspired by Korean elements such as the traditional dance Buchaechum (classical fan dance usually performed by female dancers), Eoyeo meori hair and rhino beetles found in the region of Jeju.” 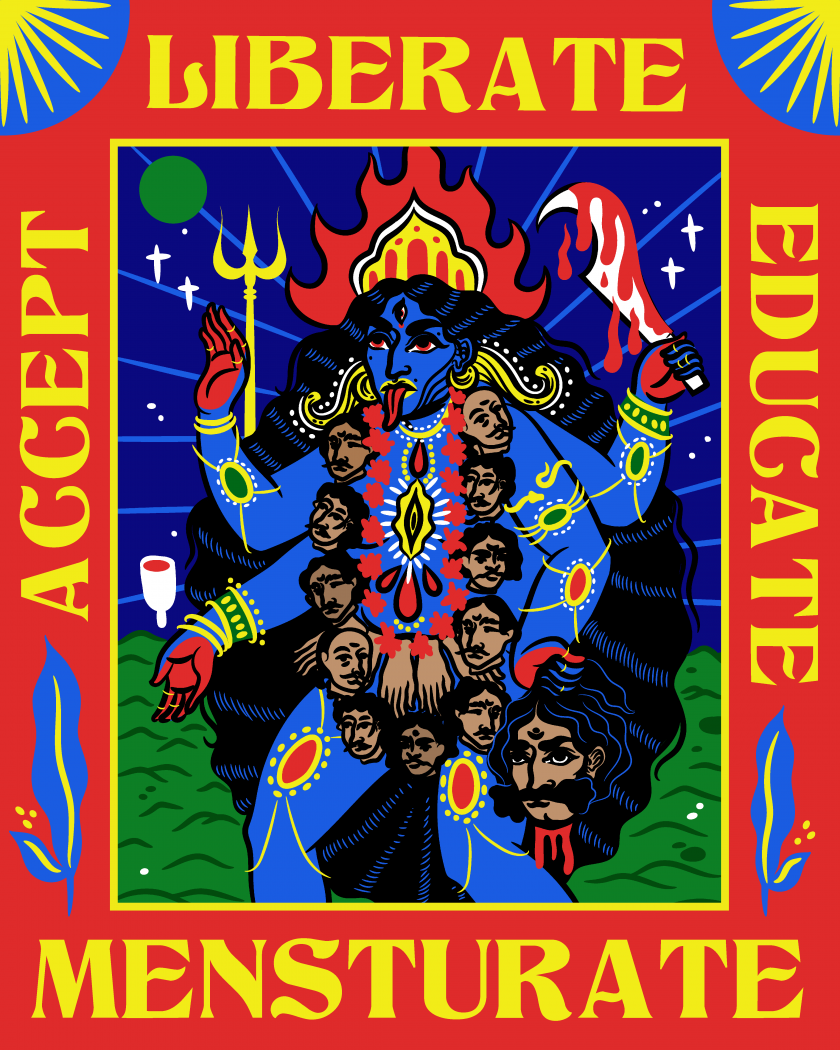 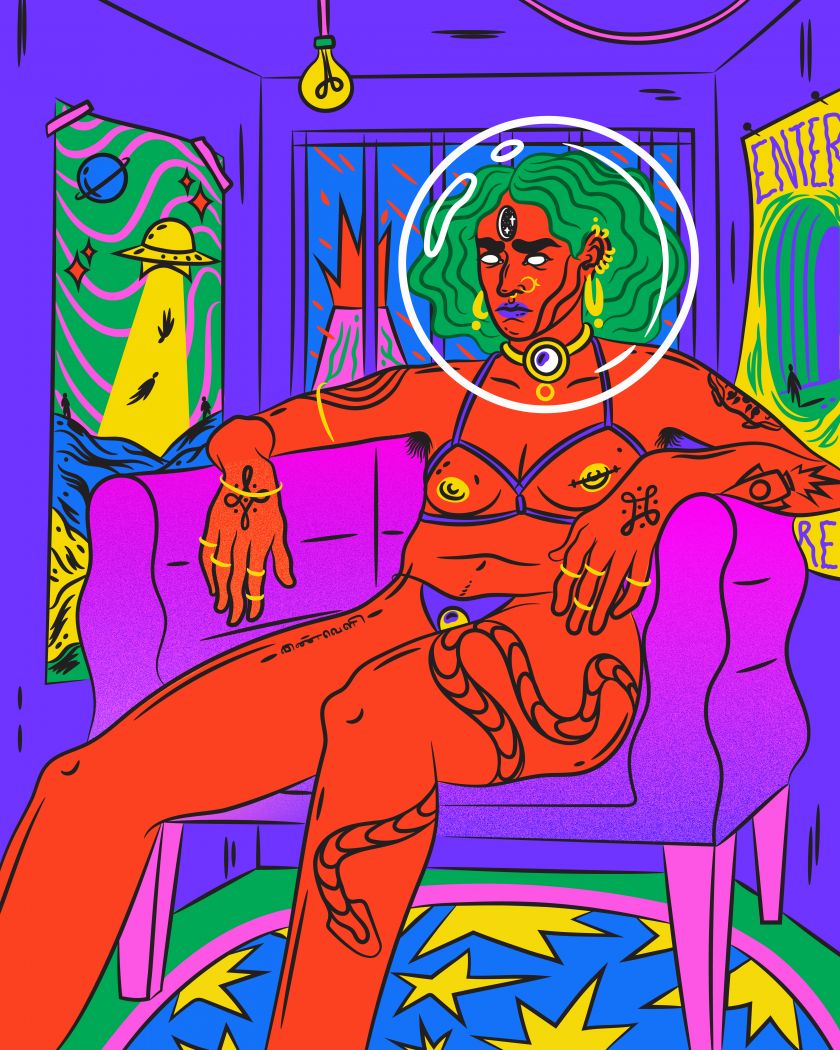 Spaced Out, part of a personal project showing yearnings of escapism, hopeful of the future and thoughts of current restlessness © Osheen Siva 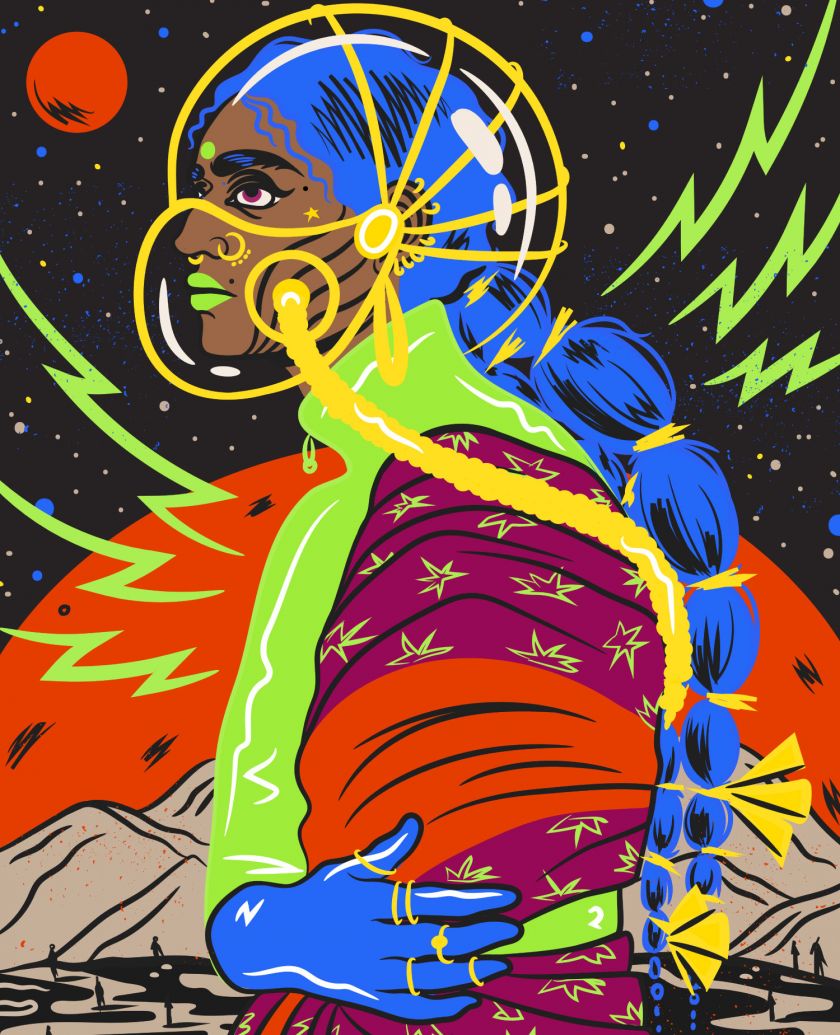 Pandemic Penn, (“Penn” translates to lady in Tamil) features a speculative illustration on the future of masks and attire in the Indian context inspired by the current COVID- 19 pandemic © Osheen Siva 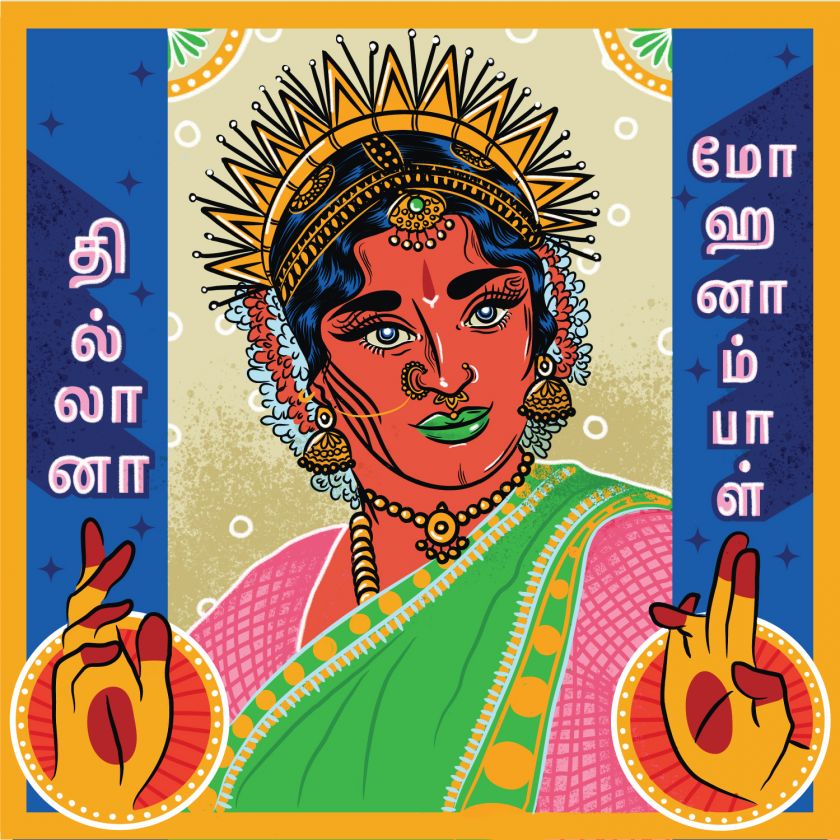 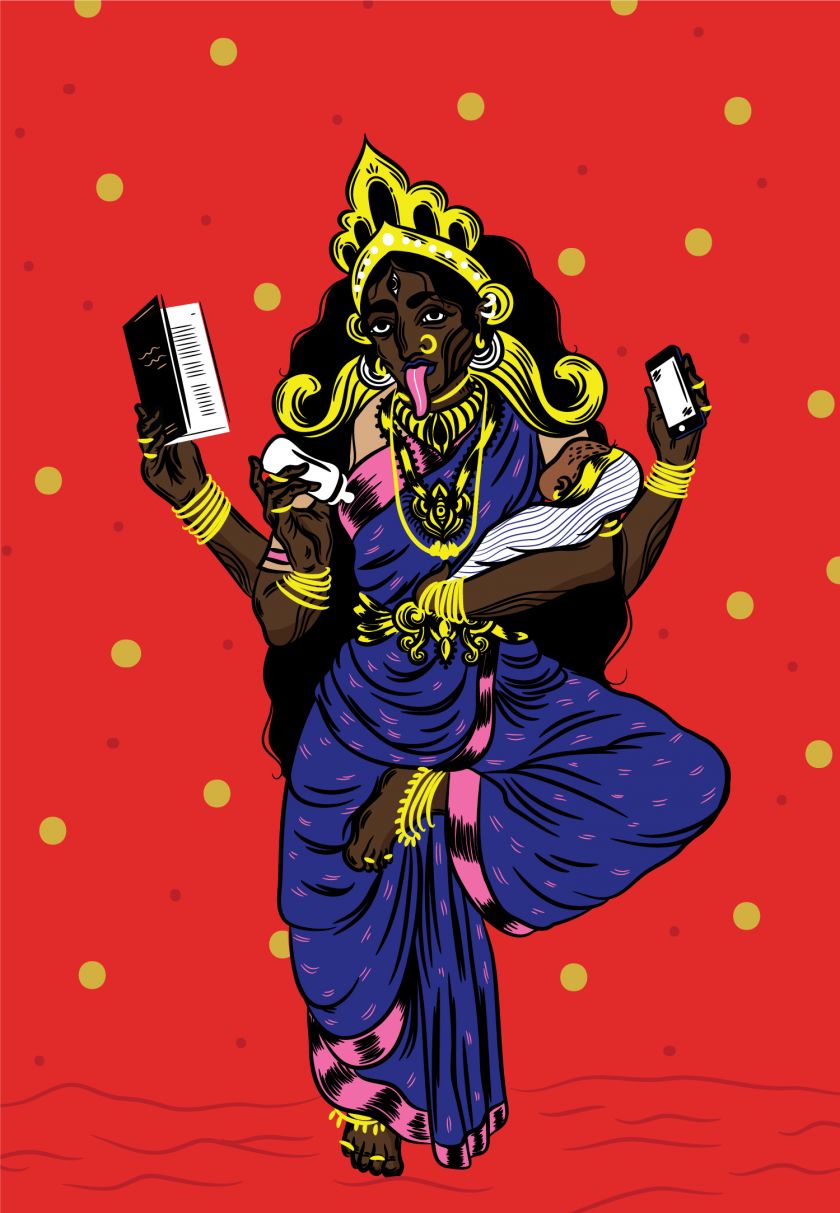 Commissioned by The New Yorker for the Mother’s day edition, this poster was inspired by Kali/ Kaliamman as she’s called in South India © Osheen Siva 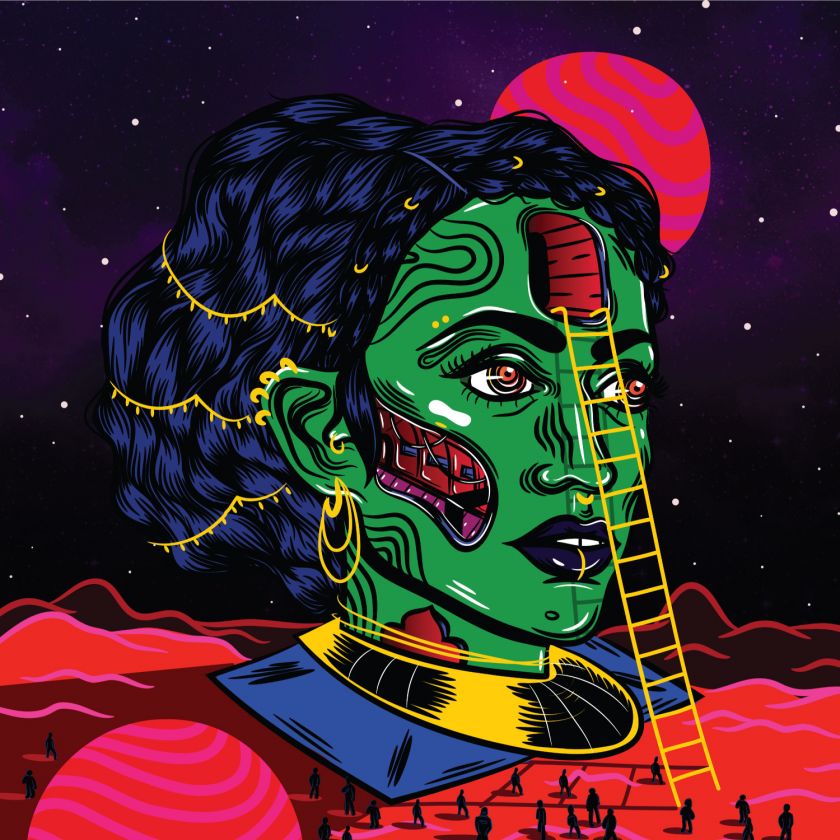 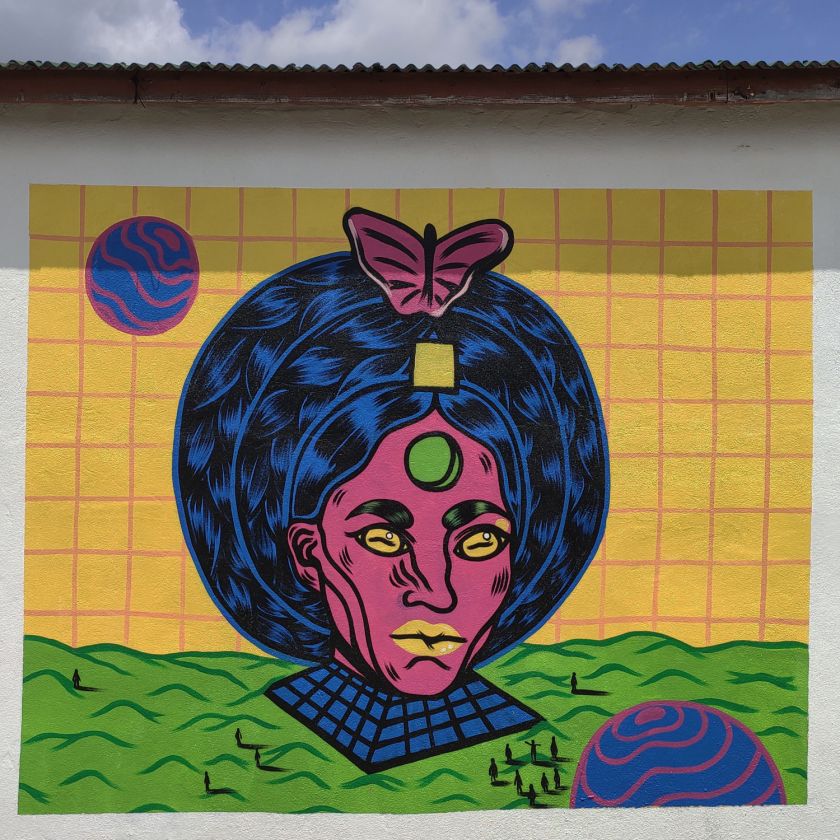 Mural made during the Museum Next Door residency at Jeju Island, South Korea © Osheen Siva 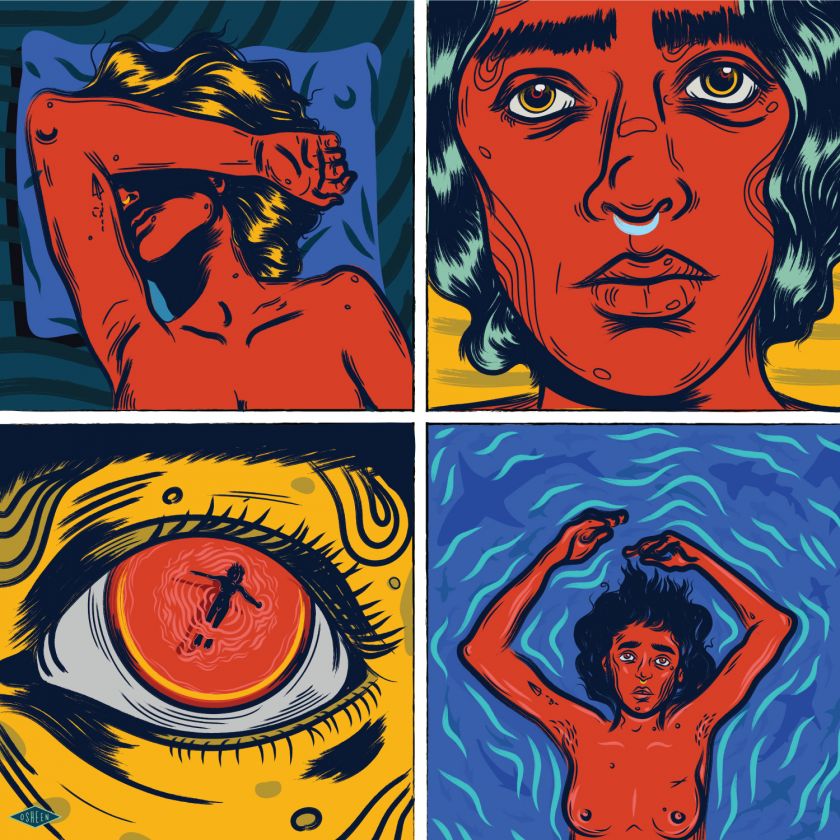 Strange Dreams – Series based on vivid dreams as a result of sleep paralysis, difficulties of everyday routine, and social anxiety respectively © Osheen Siva