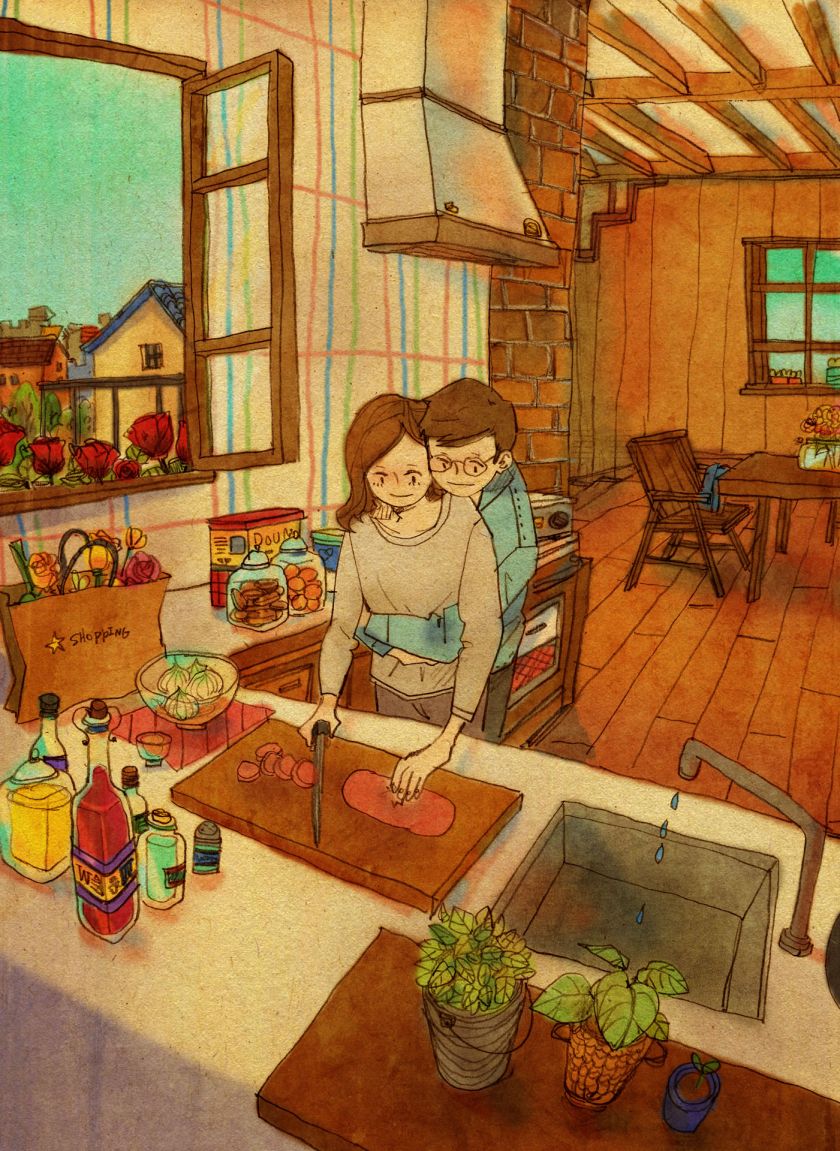 With over a million Facebook fans and just under that figure on Instagram and YouTube, South Korean artist Puuung is responsible for probably the most famous fictional couple in illustration and web animation. Clearly, countless people worldwide have been enjoying Puuung’s chilled and cosy slice-of-life since the 2010s, following the adventures of The Couple through numerous paintings and cartoon shorts.

If the anime mascot of the Lo-Fi Girl epitomises our socially-distanced times, studying alone as chilled out hip hop plays in her room, then right next door for sure is Puuung’s Couple. There they enjoy each other’s company to a sublime choice of jazz and acoustic; you could call it a ‘lofi’ love, if you want. Their picturesque world, meanwhile, is like an animated version of Amélie, “filmed” in the style of an 8mm home movie. But the origins of this fairy tale romance were actually less comfortable and romantic than you might think, as Puuung, real name Park Dami, tells us by email from Seoul. 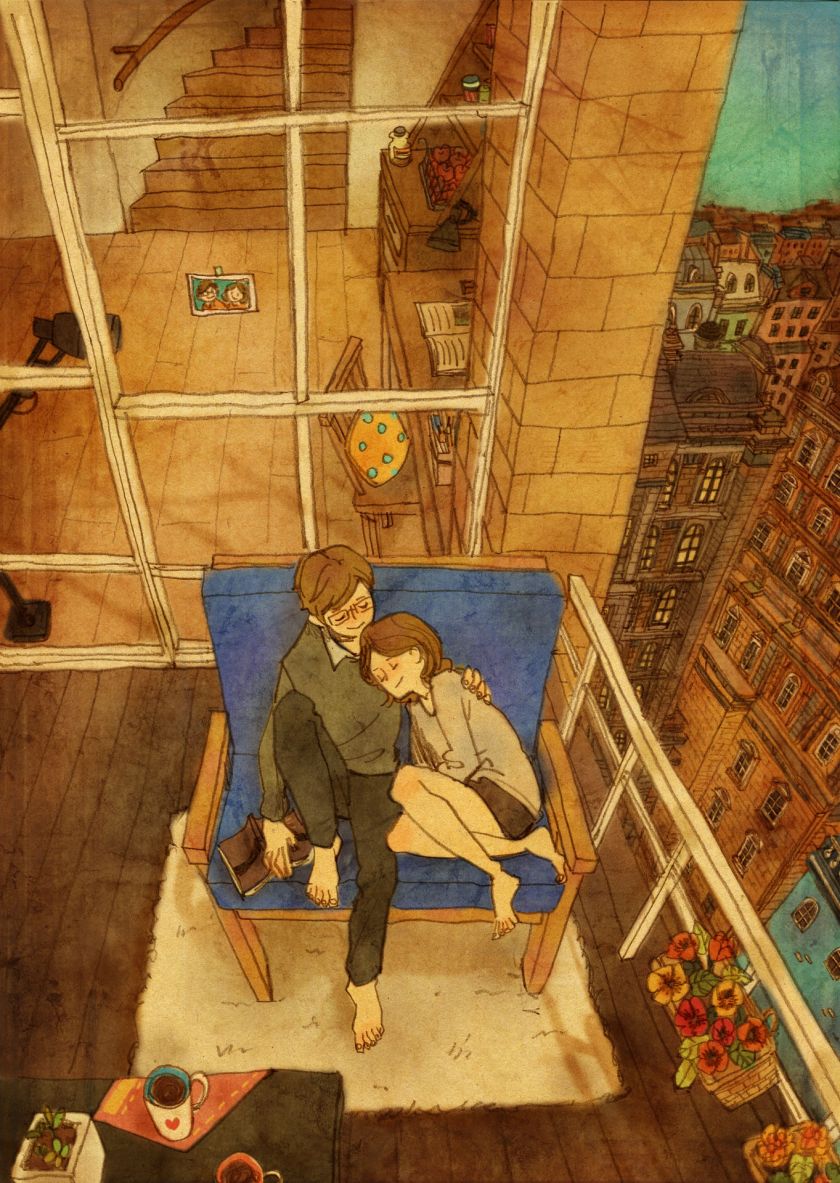 “Before drawing illustrations of The Couple, I was a student who learned animation in college,” Dami tells us. “I’ve loved drawing since I was very young. I went to university as an Animation major, but my school life wasn’t all that fun. To be honest, I wasn’t that good at drawing. I knew that my skills were not good enough, so I think I did everything the professors told me to do. Even with an unreasonable schedule, I couldn’t refuse, so I’d spend all night drawing to get things done.”

“This kind of life repeatedly led to a slump. Eventually, I hated drawing, and the whole world lost its light as if it had faded away. So I started painting for myself, and I tried to fill my art with my favourite things like pretty places, love stories, and cats. This was the reason why I began drawing illustrations of The Couple and why I then began animating them. I’ve been non-stop busy ever since!”

Keeping the creative Cupid busy have been the many videos, books and paintings which portray the evolving story of the loved-up twosome: dating, long-distant relationships, and private moments as told with very little dialogue and, in the case of the animations, a whole load of chilled instrumental music. 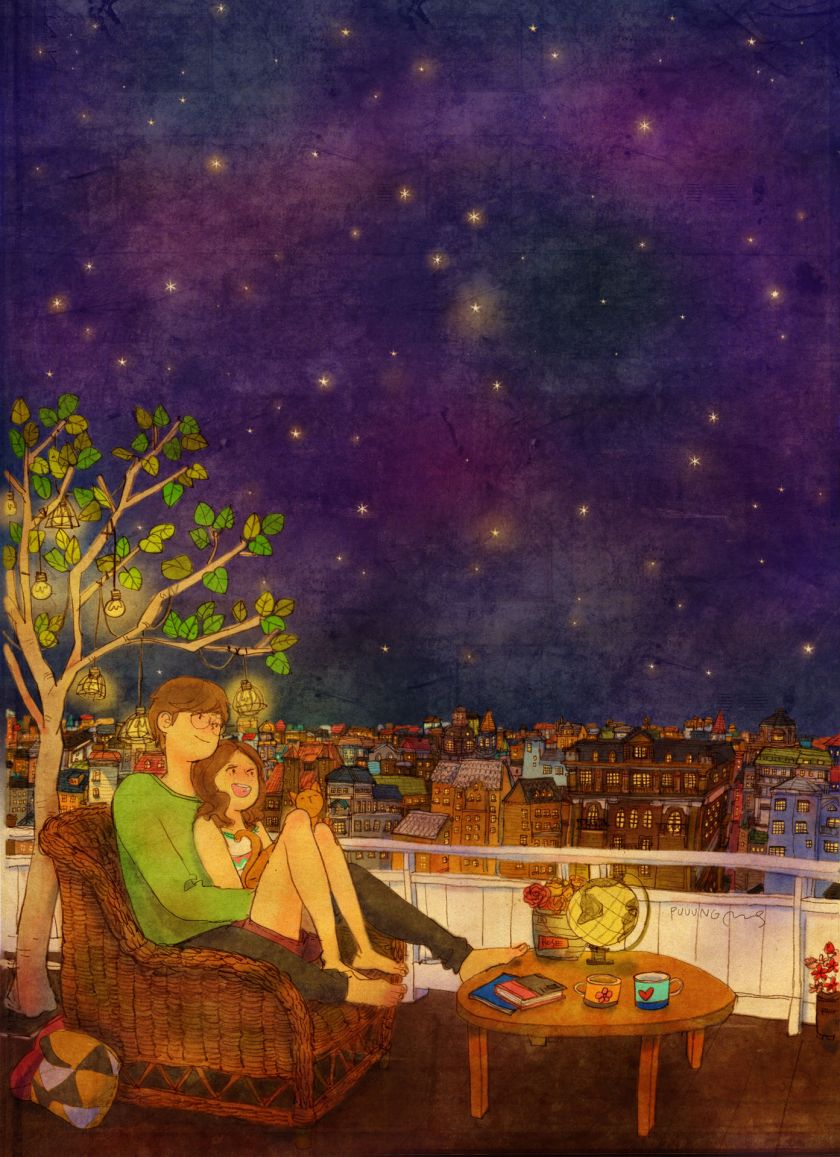 “A lot of people say my works remind them of their own story. They capture our normal daily lives that are nothing special: We sit together on the sofa, watch TV, eat delicious food, take a walk whilst holding hands, talk about trivial things, and give each other warm hugs. I think those small and trivial moments are a very precious part of our lives as I believe that love shines in these small moments. I think people who like my images feel the same way as me.”

Those same fans will no doubt enjoy the latest colouring book Puuung has released, where The Couple’s painterly and rather Parisian world is all yours to colour in.

“When I paint various colours on the screen, it makes my heart warm. If a sketched character is like an empty box, then colouring is about putting various memories and minds into this empty box. The mood of the painting changes completely depending on how you colour it with your heart and emotions.”

“I made a colouring book with the hope that the people who like my paintings will enjoy colouring it. I think it would be special to colour characters with your own stories in an empty box. But I was a little worried when I produced this book,” Dami continues. “My drawings have a unique colouring, so I thought it would be awkward if the colour faded. However, when I removed it, I was able to discover the dense charm of the original sketch.”

“Honestly, it was fun, and I want to keep trying this kind of work.” 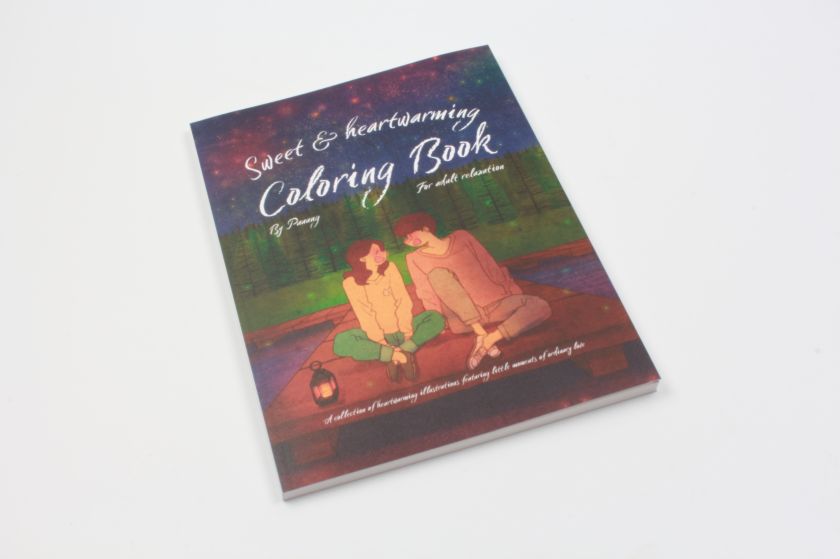 I learn that Puuung creates in a similar world to that of the couple, filled out as it is with creature comforts: she listens to jazz or audiobooks as she works, with a somewhat serious case of the munchies. “Just as I eat delicious snacks when I watch a movie or play a game, I think I eat a lot of things when I draw. There are many times when I work while enjoying hot coffee, tea, or chocolate.”

It’s such a cosy-sounding world of wonder. Speaking of wonder-lands, Puuung last year illustrated a Korean edition of Alice in Wonderland, proving that there’s plenty of strings to her bow – although she wasn’t necessarily keen to illustrate classic books at first. 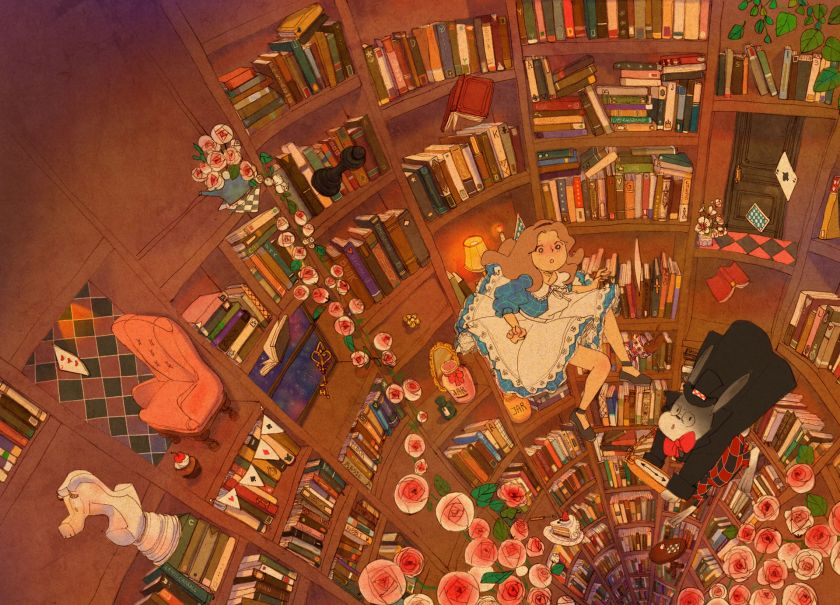 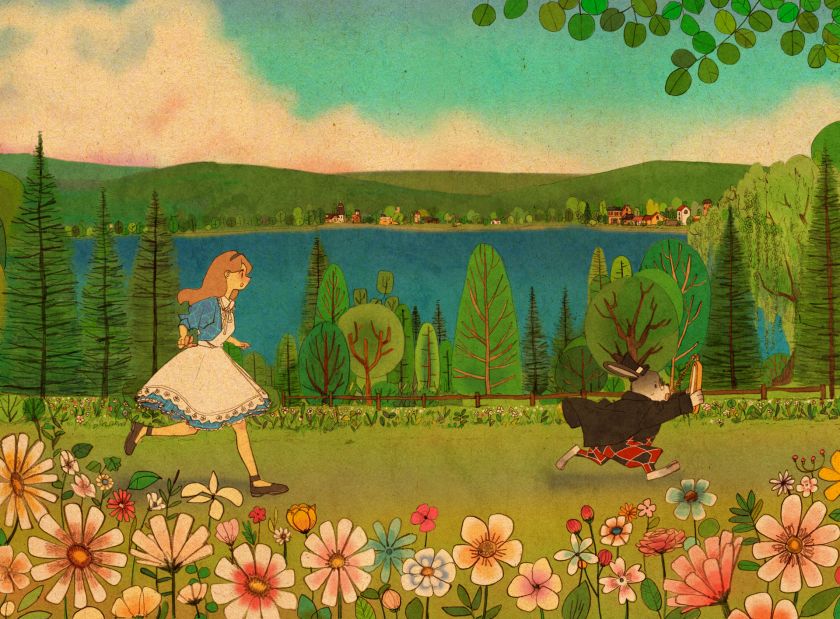 “I didn’t usually prefer to work on illustrations based on classical literature. The original work can be like a ‘fence’ stifling my creativity. But with Alice’s Adventures in Wonderland, I had no choice. I mean, is there any animator out there who doesn’t love Alice?”

Dami read the book several times for the project, focusing on the strange spaces, mysterious anecdotes, and unique characters that make up the work. “While I was reading the book, I was very happy to have various images in my head. But there were many difficulties: There are some typical images that come to mind when you think of Alice. It is the original illustrator John Tenniel’s mysterious illustrations, along with the Disney animation. But I wanted to express Alice in my own style away from this typical imagery.”

“As I worked on it, I became greedy and drew more scenes than the publisher asked. It was very difficult to reinterpret the work, but I had a lot of fun working on it, and I liked the results. Through this work, my ‘prejudice’ against illustrating classic literature was also broken. Now I want to try drawing more classical literature in my style!”

In the future, Dami would also like to expand into longer animated narratives, should any streaming platforms be interested. “I am an animator who works alone, in charge of everything except the music. As a result, I’ve had no choice but to work on short animations.”

“But if I can work on a big project someday, I want to make a long animated series with more space for my stories to breathe. A full-length animation with a solid storyline or a romantic TV sitcom with a light feel would be good. I’d like it to be very different from my previous work in many ways.”

“For now, I’m going to continue to work on illustrations and animations. I still don’t know yet how the future of The Couple in my work will unfold. A lot of people are asking when they will get married, but since it’s an unknown world that I haven’t experienced yet, I think I need more time to think about it.”

“For the time being, I think I will continue to portray the daily lives of couples. There are still many small and precious stories that I want to draw!”

Check out the official Puuung site and YouTube for more. 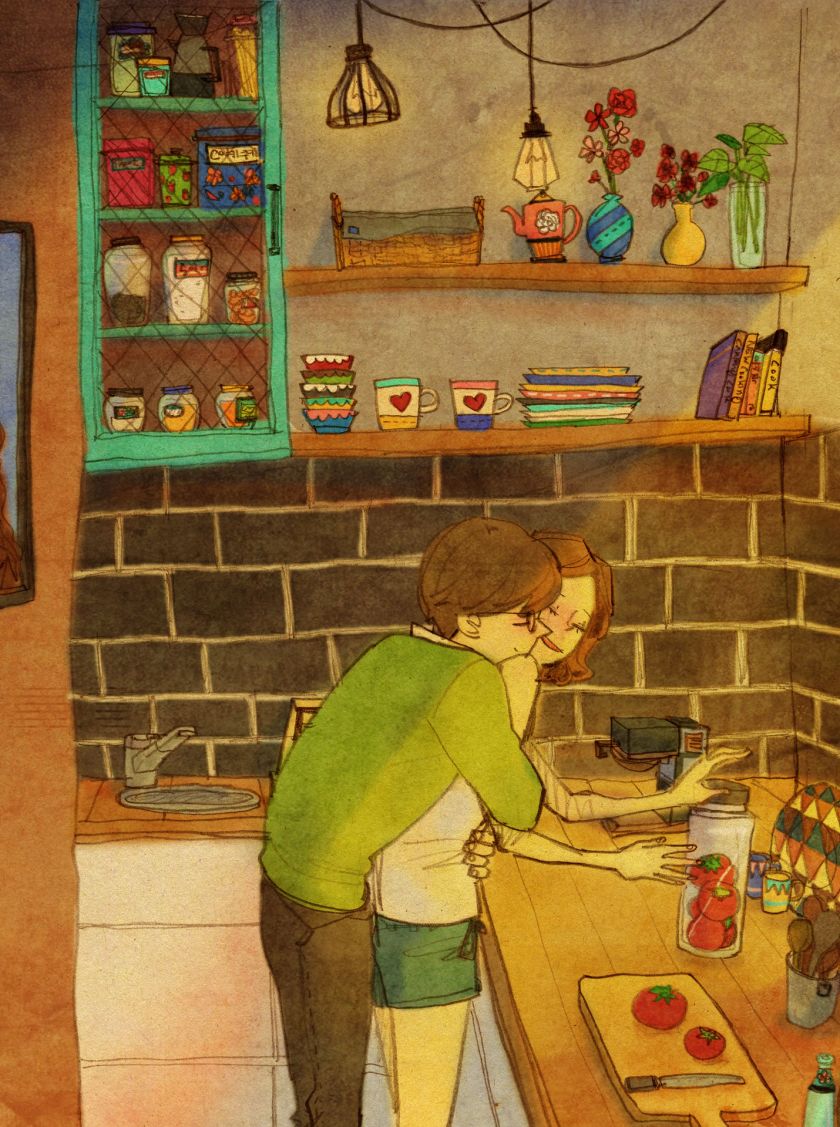