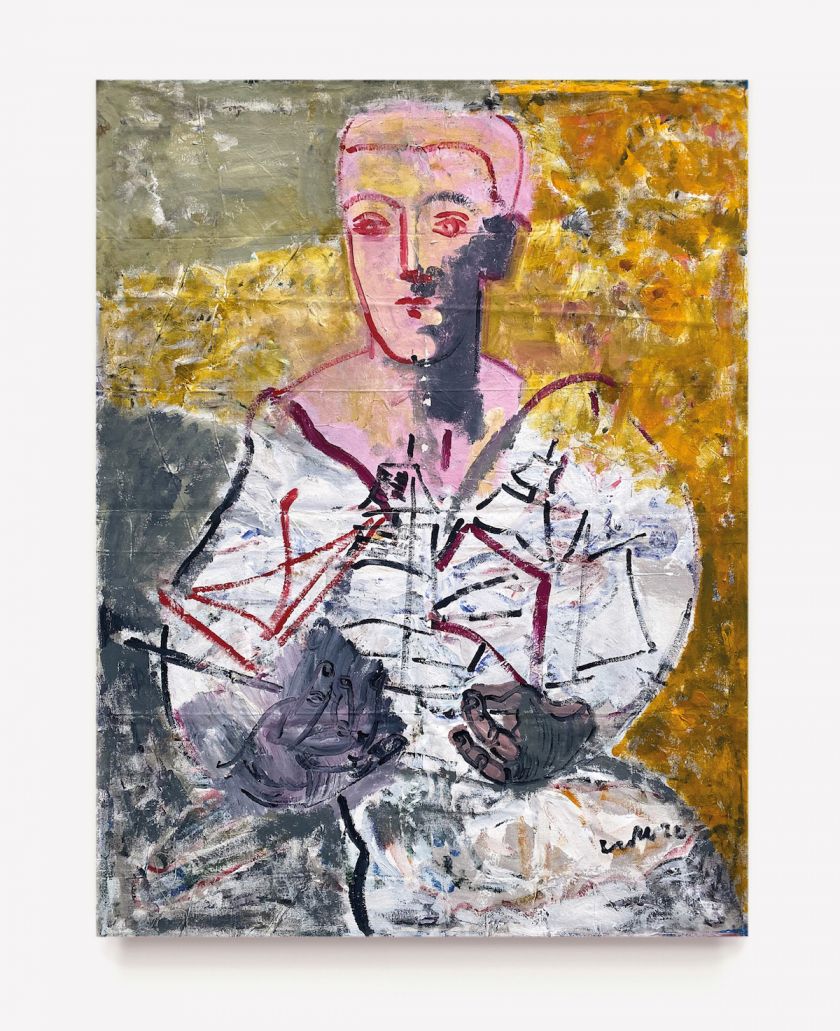 Touching on lucid dreaming; intense creative frustrations; the Romantic Sublime; guitar feedback and Kate Bush, a chat with artist Luke Hannam is a bit like having someone tick off a checklist of dream subjects. His ability to discuss complex concepts with both total ease and absolutely no hint of condescension or pretentiousness is a rare and welcome knack.

His attitude can perhaps be seen as a reflection of his paintings: almost urgently expressive, packed with symbolism that draws on everything from Old Testament stories to his own recurring dreams.

Hannam is currently showing his solo exhibition, The Compass & The Rosary at the Anima Mundi gallery in Cornwall and online, and he’s finding himself “in a state of post-show reflection” while starting work on some new pieces. “Certainly one of the arts of painting is knowing when to stop and knowing when to let the painting suggest rather than dictate,” he says. “I think that’s the really nice thing about great work: it doesn’t dictate, it mumbles to you, and you interpret the mumbles.” 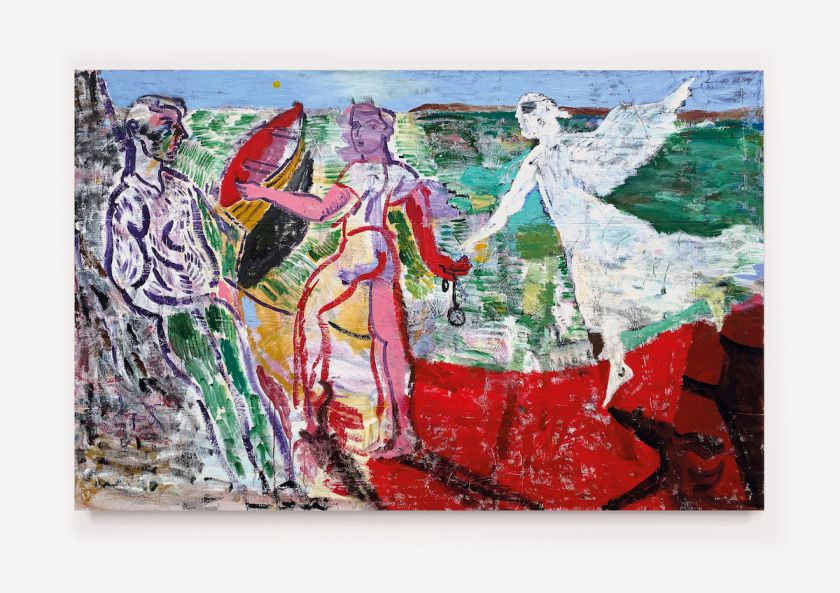 This idea of mumbling is one of the first of many piquant metaphors that Hannam puts forward. While he doesn’t want his work to present a singular idea verbally, he’s effortlessly articulate about the nuances of the creative process, both succinct and no-nonsense, vaguely poetic. So, what sort of suggestions does he want to hint at for viewers of his work? “I think most people who are creating things aren’t the last to understand their work, but they’re not the first either. You’re being driven by a visceral sort of light in the dark: you don’t know the meaning of things necessarily, that comes to you later.”

Poetry looms large in Hannam’s work, namely that of the Romantics and the notion of the Sublime as explored by the likes of Coleridge, Wordsworth and Keats. His painting The Road to Porlock borrows its title from a phrase in Coleridge’s Kubla Khan, in which the “person from Porlock” is a symbol of the things that detract from those moments of reverie-like (in the poet’s sense, opium-scented) creative flow. 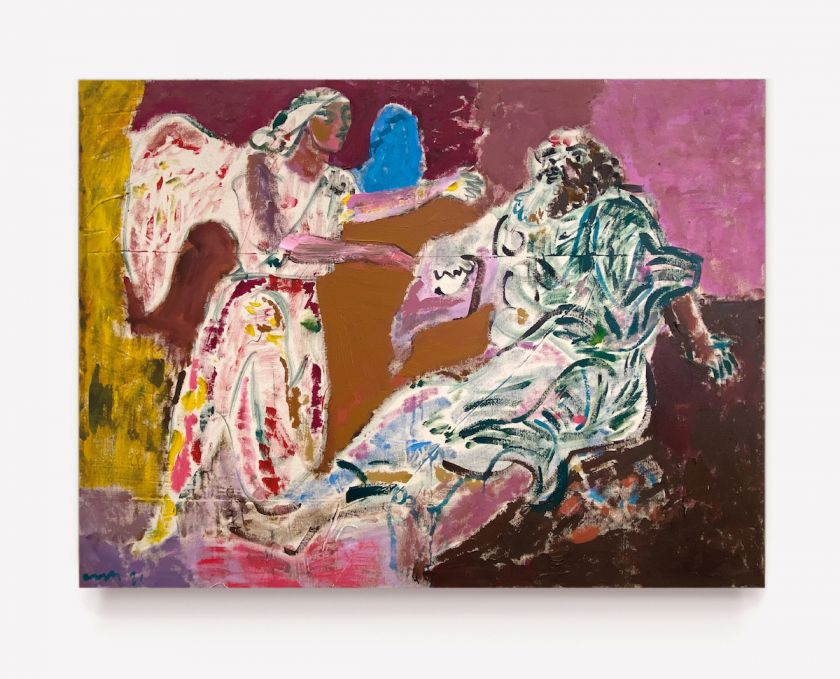 Luke Hannam, Elijah and The Angel

The works in the current exhibition are also largely informed by certain Biblical stories from the Old Testament and religion more generally (hence the Rosary part of the show title.) The religious imagery in his paintings is partly ascribed to the fact the artist was raised as a Roman Catholic but is more so down to the storytelling, he says. “What really drives me is the fact that these stories are told again, and again, and again, so they prove themselves to have some kind of intrinsic value. And a lot of Bible stories not only exist because they get retold all the time, but because they’ve also permeated out into wider storytelling. Almost all stories can be linked back to religious texts or ancient philosophical ways of trying to define a moral stance generation after generation.

“I’m really interested in that rippling effect of meaning through time. I find it very interesting to take powerful characters, especially from the Old Testament and meditate on those ideas; muse on them, draw them, fixate on them until they turn into a visual thing.”

The works in the current show draw from such texts in their characters, themes and as an element within a wider visual language. Hannam’s process is to “draw a lot”: once he’s honed in on particular images or motifs, he draws them over and over again to “get a feeling for what they are.” What comes up a lot is his fascination with timelessness: “Feeling and emotion change through time. If we met people from the 10th century, obviously there’s been some technological changes, but other than that, we still get to talk about our feelings and environments and love the same way—that sort of grasping for things and meaning.” 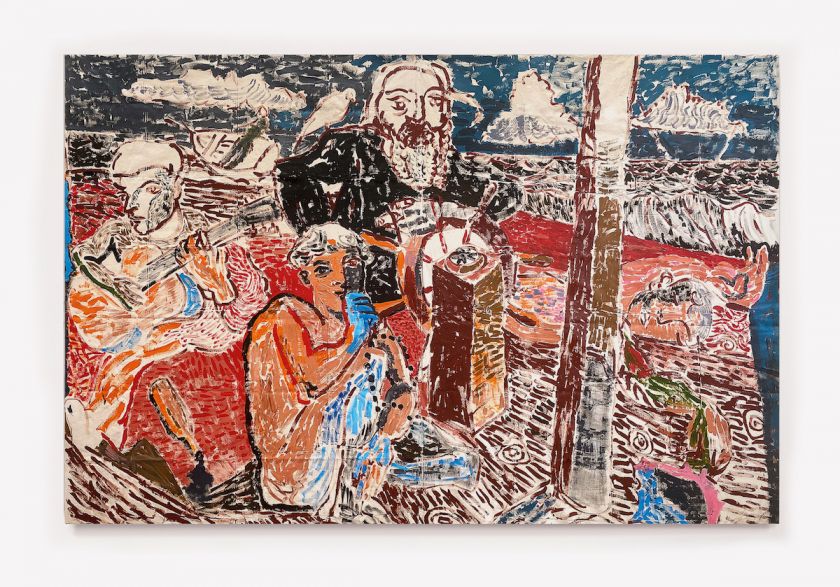 Luke Hannam, The Compass and The Rosary

The other major thing Hannam’s work draws on is his dreams: since childhood, he’s had very vivid ones, and today says he has “multiple recurring dreams” and practices lucid dreaming. Waking early, he then spends the first few dusky hours of the day drawing things relating to his dreams. These elements then later come together to form compositions along with other elements. “I have repeating dreams—I sort of know what’s going to happen. There are interesting turbulences between genuine day-to-day experiences, maybe things that you think are good or bad. You can feel your brain trying to play around with those images,” he says. “I can sort of see what the dreams are doing, trying to spin all this stuff around, mix it all up… I draw to sort of stop the water spinning in my mind.”

I’d initially heard about Hannam thanks to his music: first his project Tall Blonde, then Gramme. Hannam had previously been in a band called Emperor’s New Clothes, which was around from 1988-1994. Formed in 1994, Gramme signed to Trevor Jackson’s label, OUTPUT, that same year, though they didn’t release their first EP, Pre-Release (also produced by Jackson) until 1999. By then, there’d been a change of label and management, and Gramme disbanded in around 2000. Hannam’s Tall Blonde project went on to release a single in 2002 and the 2005 LP, Cassette, before Gramme were buoyed by an unexpected (and rather welcome) realisation that their music was being cited as a direct influence by the likes of Hot Chip and LCD Soundsystem. Gramme finally released their debut album Fascination in 2013, 17 years after their first live performance, following it up with the sublime Disco Lovers in 2019. 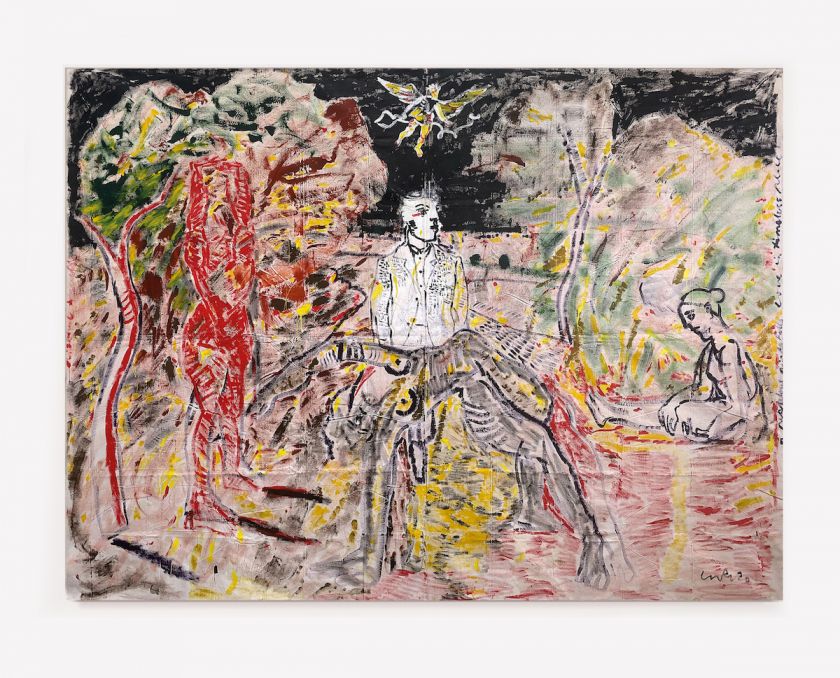 You can see why the likes of James Murphy were fans: the bass lines are insistent but wry; the disco grooves tempered with a recognition of a world tinged with ennui. I’d read a piece where Hannam compared visual art and music and asked him to expand on it. “One of the key components of noise and rock and roll was feedback—this whistling, howling noise, this sort of dysfunctionality… I realised that this is what always attracted me to rock and roll. I was wondering what the equivalent was in painting, so I decided to write ‘I fucking hate painting’ across the canvas—not just once, but again and again, working it up, like feedback. I was refusing to allow the painting to just become this beautiful thing.

“I built up this very adversarial relationship with the painting: we were in combat with each other, which wasn’t how I’d been painting before. But it was really interesting.” Hannam compares his aesthetic preferences in painting to those in music. “While I’m talking about the vagaries and mysteries of creativity, I wouldn’t like to give the impression that I don’t have intention or that I don’t have things I’m trying to communicate,” he says. 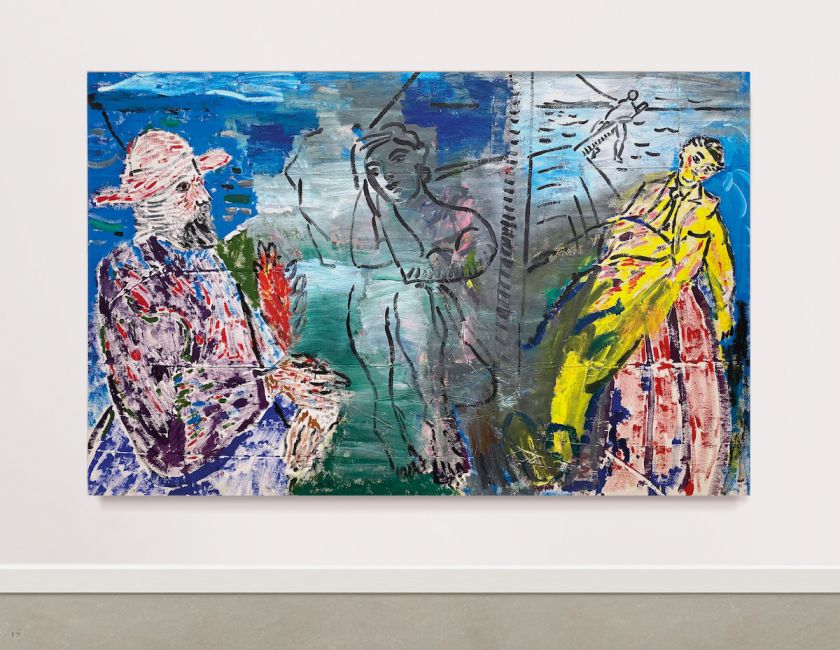 In literal terms as relating to his paintings, that means that he uses untreated industrial canvases rather than those specially designed to be used in fine art contexts. Their inherent creases are left in, as “scars” in the canvases. On the one hand, there’s a resonant colour language, but they’re painted roughly onto rough canvas in a way that almost seems to contradict some of the colour ideas…” He’s interested in the idea that things which are ostensibly “raw” or “dirty” can become beautiful. “It’s something to do with that bridging between those two things and finding those various things in music and in painting. It must be something to do with me wanting to describe the way I experience being alive, which is pretty visceral and gutsy. What I don’t like about ‘beauty’ is that it’s an elitist concept.”

During his years of music-making, Hannam continued to paint and says that when visual art became “secondary”, it became easier in a sense, “But I wasn’t painting enough to make much progress.” That’s all changed, though. Now based in East Sussex, the last lockdown-led year has seen a series of unexpected, fortuitous turns for his artwork during a time that, for many artists, spelt disaster. His work was picked up by Anima Mundi, a renowned contemporary art gallery in St Ives, Cornwall, and all being well, he will have a show opening in West Hollywood in the future. “It’s funny how you can spend all your time knocking on doors trying to make things happen, but in the end, the breakthroughs often come through serendipity,” says Hannam.

“I think of creativity as going the wrong way up an escalator. If you walk at a certain speed, if you do a little bit of it, you stay in one place. If you do less, you will go backwards. It’s only if you go faster than the escalator is going the other way that you go up. Progress is working against the tide of something that makes you want to stop.” 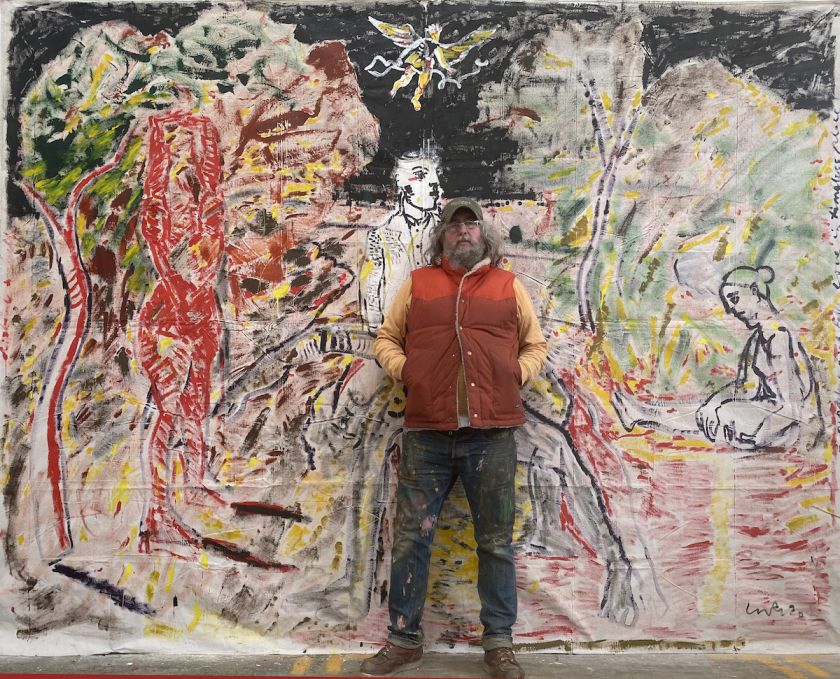