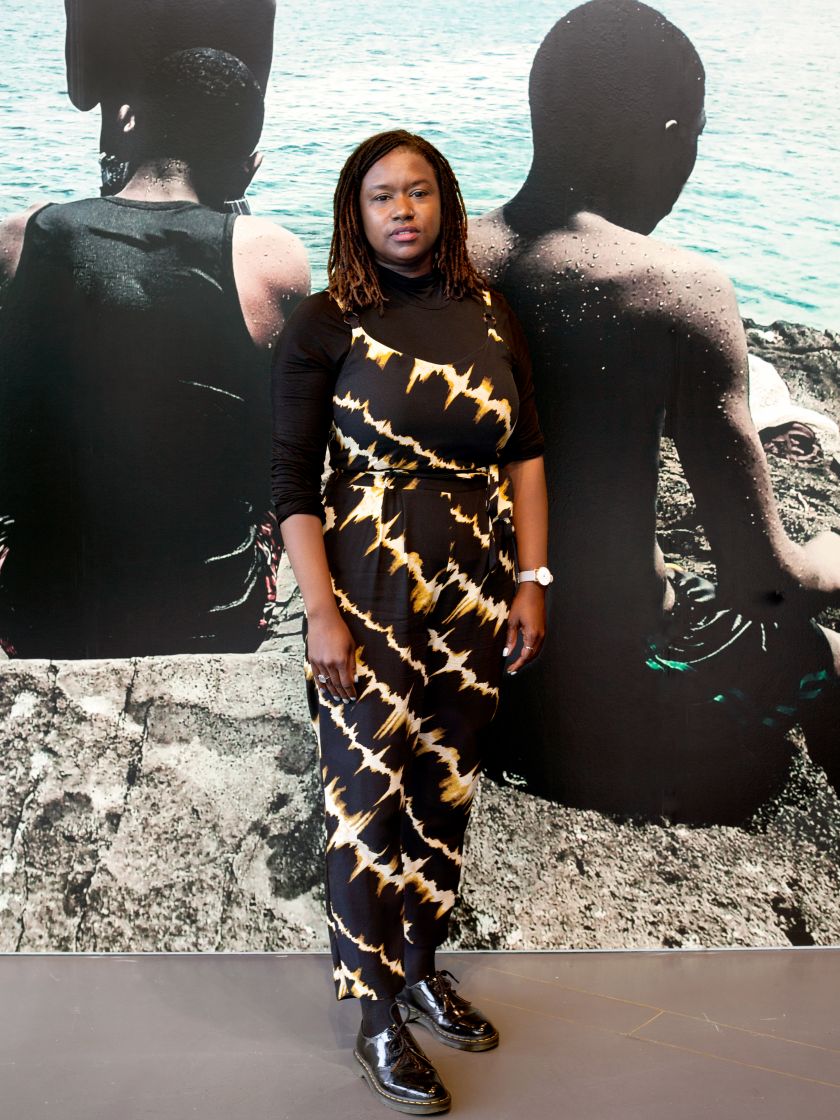 Kaia Charles is cultural projects manager at Greenwich Penisula and a curator for NOW Gallery in London.

A big believer that art and culture should be inclusive, Kaia is also passionate about highlighting the work of emerging designers and artists who establish links with local communities in creative ways. She works alongside artist Jemima Burrill to develop exhibitions for NOW Gallery on Greenwich Peninsula and has commissioned site-specific artwork such as Conrad Shawcross’s Optic Cloak, Colourblock Cranes by Morag Myerscough as well as artist hoardings by renowned illustrators Matt Blease, Jack Taylor and Ricardo Cavolo.

In 2017, Kaia curated The Body Issue, a photography exhibition exploring anatomy, beauty politics and self-expression, while 2018 saw her co-curate Another England, a photographic retrospective of the last 100 years of black and Asian Heritage in England, a partnership between NOW Gallery and Historic England. Both are part of Kaia’s ongoing series, Human Stories – annual photographic displays that encourage a “contemporary discourse on modern life and the human scale”.

This month, she’s behind The Peninsulist Presents, an eclectic line up of summer activity inspired by the creative community at London’s Greenwich Peninsula. We chatted with Kaia about this and more.

Tell us about your career so far… you studied Interior Design at university?

I’ve always been interested in architecture and interiors. I studied architecture briefly at the University of Cape Town and then interior design in Farnham at Surrey Institute of Art and Design. The course looked at the principles of interior architecture and spatial design, specifically temporary structures, film sets and exhibition design.

I was part of the Contemporary exhibitions and Fashion and Textiles departments at the V&A Museum. I project managed exhibitions such as Hats: an Anthology by Stephen Jones as well as satellite interventions by architect CJ Lim and digital artist Julius Popp. I also devised and co-curated several Friday Late events which explored up and coming creative neighbourhoods like Dalston, Peckham and Tottenham.

Did you always know you wanted to do something creative?

Yes, always. My upbringing has always put creativity and a sense of identity at the centre of everything. I’m from the Caribbean and my family all explored ambitious architectural builds that embraced island topography. This framed our childhood. Houses are also constructed in stages.

I was mainly influenced by my uncle in Antigua, who is a landscape architect. He built houses and villas influenced by Caribbean vernacular architecture and local plant flora – cacti, ‘shack shack’ trees and many other tropical species. My father also has propagated local Dominican fruit trees- very Garden of Eden. My family all encouraged my sister and me to be creative, and they still have many charcoal sketches and artworks of ours on display in their homes. We are also big collectors of African and Caribbean art.

Talk us through your current role

My role is multifaceted; in principle, I foster art led partnerships which benefit the growing resident Greenwich Peninsula communities and people in the surrounding areas. It fuses arts management and curation.

I co-curated the exhibition and events programme at NOW Gallery with Jemima Burrill and am responsible for architectural art interventions like Studio Weave’s 33 Pavilion in Central Park and Morag Myerscough Siblings on The Tide. I also broker key annual outdoor arts festivals like the Urban Village Fete and Turning Tides.

Most recently, I’ve curated with our culture team a digital series The Peninsulist Presents, which aims to connect with a fantastic ecosystem of creative practitioners to keep the cultural conversation going through the lockdown.

What do you love about your work?

All of it! I enjoy seeing how creative practitioners interpret the Greenwich Peninsula site. We have cutting edge architecture and wide spaces, so there is often an opportunity to work to a different scale here. Our NOW Gallery programme captures the zeitgeist, engaging with artists who aren’t afraid to make bold statements. Above all, I enjoy that we are collectively making art accessible for communities and visitors to this new vibrant destination.

You’ve been curating the Human Stories series at NOW Gallery. Tell us more

In 2016, I devised a series of photographic exhibitions that would confront social issues through the lens of emerging photographers, writers and filmmakers. We’ve explored notions of community, belonging, race and representation over the four iterations of the show so far. Notably, two years ago, we collaborated with Historic England to present the underrepresented narratives of black and Asian heritage in England with Human Stories; Another England. The show presented several archival photographs from Getty, Lambeth Archives, Autograph ABP and private collections. These were juxtaposed against a selection of newly commissioned work.

Is there anything from the series that particularly stood out or moved you?

There are so many outstanding commissions to draw from. I recently was in conversation with photographer Nina Manandhar and creative director Theo White who both have contributed to the series. We discussed how both their commissions explored evolving youth subcultures to elevate the representation of black and brown youth in the UK. I would say that they are two of my favourite practitioners. Also, the film and photographic works of Caribbean photographer Nadia Huggins which we showcased last year were sublime.

This summer has seen a shift in our cultural landscape and rather than halt; we have pivoted to digital platforms. NOW Gallery ran some curator talks, and we are currently streaming The Peninsulist Presents. The programme runs biweekly and brings together the best of music, film and creative tutorials.

We are revisiting classic black British film this summer and collaborating with film community Bounce Cinema. 2020 has encapsulated many socio-economic shifts, but none more so that how race and inequality are addressed.

Our team has enjoyed researching the film archives, including the BFI and John Akofrah’s Smoking Dogs Films’ catalogue. Audiences were transported back to the political awakening of 1970s London with Menelik Shabazz’s Burning an Illusion (1981) and Horace Ové’s Pressure (1975).

Isaac Julien’s coming of age film Young Soul Rebels (1991) explored the discrimination and tensions between youth cultural movements. We will spotlight contemporary works on 21 August and will screen Jenn Nkiru’s Black to Techno (2019) and a unique compilation of digital animations by artist Vince Fraser. To celebrate the spirit of Notting Hill Carnival, we will screen Zak Ové’s recent film, A Land so Far.

On 7 August, we bring the directors John Akomfrah, Jenn Nkiru and Zak Ové together for a Live Q&A followed by a John Akomfrah double bill, Goldie: When Saturn Returnz (1998).

How do you feel following the events of this year? Do you think change is indeed happening?

It’s been a mixture of shock, grief, terror and exhaustion. It’s also been a period where I hope we can address systemic racism. It’s a period for honesty and introspection; it’s time to put discomfort aside. Only time will tell.

What do you think can be done to tackle the lack of representation in the arts?

Institutionally underrepresentation must be addressed through the curriculum and at board level. There is a lot of organisation and research that has been taking place at a grassroots level. Programmes need to reflect Modern Britain accurately. Community activists also need support and funding.