It’s difficult to imagine how we could have coped over the last year and a half without the ability to connect online. And it’s likely the culture of remote working and online chatting will stay with us for some time to come.

Even when all restrictions are lifted, it’s unlikely colleagues and clients will meet in person quite so often, now the benefits of remote working have become so apparent.

Yet chatting online does have its drawbacks.

However advanced the technology, there’s something about video calls that makes many of us stilted and unnatural. Text messages and emails, in turn, allow us to be more precise, but it’s easy to mistake someone’s intentions because we’re not getting those facial cues that we rely on in normal conversation.

Rise of the emoji

Hence the rise of the emoji, which allows us to enhance our communications with emotional cues that make it less likely our words are wrongly interpreted. Not to mention adding a sense of fun to our chats that makes dealing with each other an altogether easier and less stressful experience.

However, because the first emojis were aimed at mobile phone users with low-resolution screens, they had to be pretty basic. And many emojis remain so today, making them ineffective at conveying our true emotions. (How many times over the past year have you spent time hunting for the right emoji and eventually given up, or just gone for an animated GIF instead?)

That’s exactly why Microsoft has redesigned all of its emojis for the way we communicate and work now. And now, it’s revealing them for the first time. 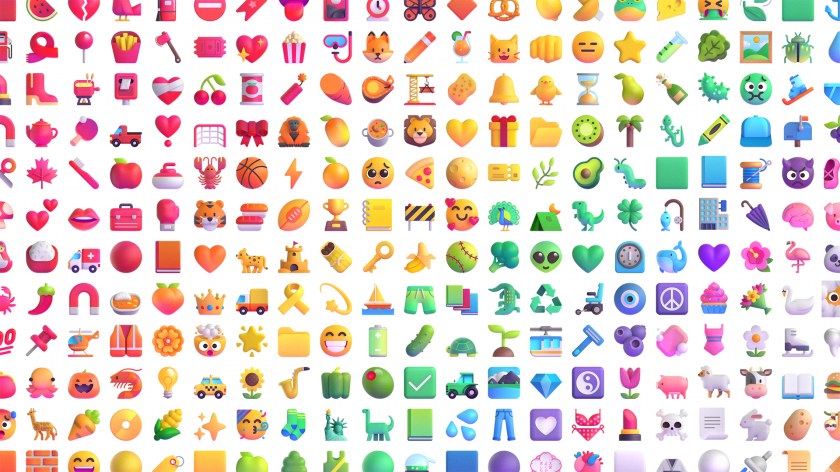 Microsoft’s move couldn’t be more timely. For example, in a recent survey, 55 per cent of people said they are using more emojis in their communications since Covid started.

Furthermore, 57 per cent feel it is professionally acceptable to use emojis in work communications because it “humanises the conversations”. Jon Friedman, Microsoft’s vice-president of design, is one of them.

“Now that the office is my home, there are hearts all over the place,” he recently told Fast Company. “I heart everything (unless I’m giving it a thumbs down). I see this with my colleagues, too.” Why? Because “over the past year I have personally come to see many more of my colleagues at all levels in a new way—as whole people with pets, kids, Wi-Fi that fails them, and garbage trucks that pass by at the wrong moment.”

“Chatting and meeting online, whether for work or play, certainly wasn’t born in the pandemic,” adds Claire Anderson, art director at Microsoft. “Neither was a major hallmark of chatting online: emoji. But when online became the only place that we could go to work or connect with loved ones, people needed more expressive and dynamic forms of communication.

“Full of life and colour, emoji are essential communicators that provide contextual cues often missing in digital contexts. Body language, the surrounding environment, subtle forms of humour— the loss of those impacts our communication greatly, but with a few pixels, we can telegraph our thoughts and feelings in ways that are fun, clear, and emotionally resonant.”

Recognising this new reality – that emojis are no longer just for teenage messaging but are becoming an integral part of daily professional life – Microsoft has been working for the last year to make its emoji system more emotionally resonant.

This has involved turning the 1,800+ emojis that exist within its office suite, Microsoft 365, from 2D into 3D, with the majority of emojis being animated. We reveal some of these new designs below, with the new versions on the right and the current versions on the left. 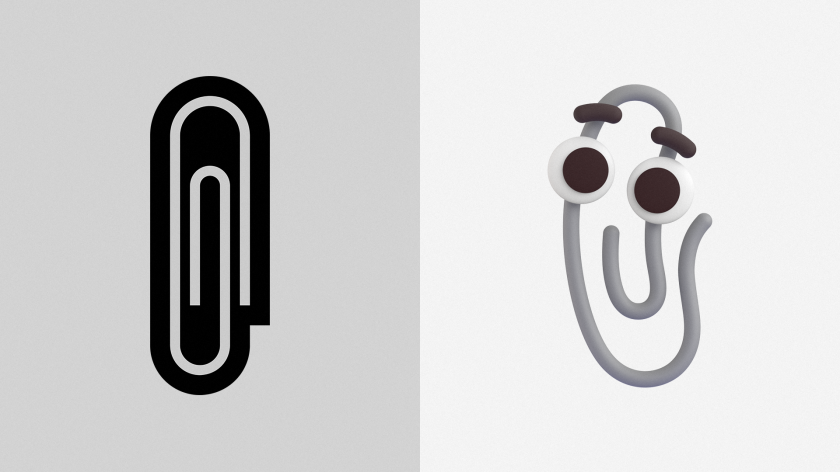 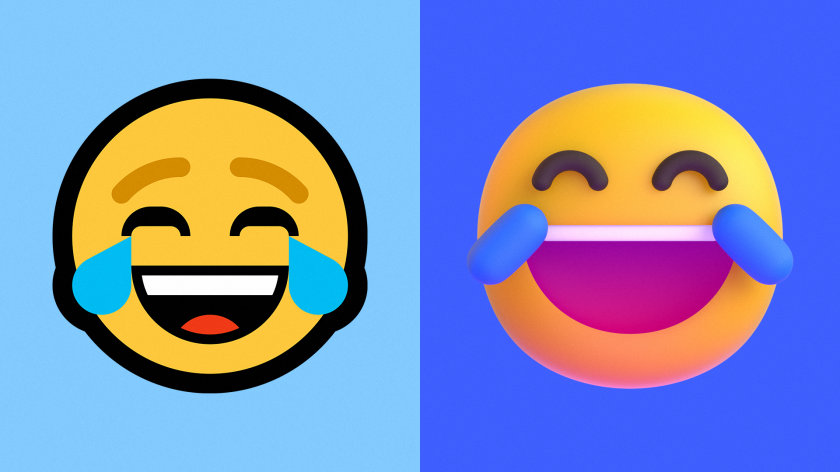 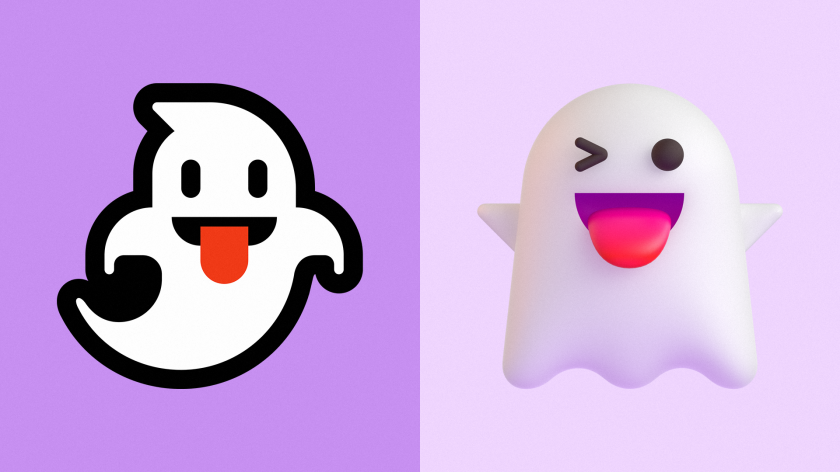 The importance of play

While emojis are often dismissed as mere frippery, Microsoft recognised that they are nowadays seen as a useful business tool, not despite, but because of their playfulness. That’s because being fun and playful can be a great way to elicit emotional honesty, something that’s vital for successful business communications.

Microsoft worked closely with design researcher Meghan Stockdale to ensure these watchwords of emotional honesty and playfulness would be reflected in the new designs. Stockdale carried out primary and secondary research into these ideas, and she was particularly influenced by the book Play: How it Shapes the Brain, Opens the Imagination, and Invigorates the Soul by Stuart Brown. 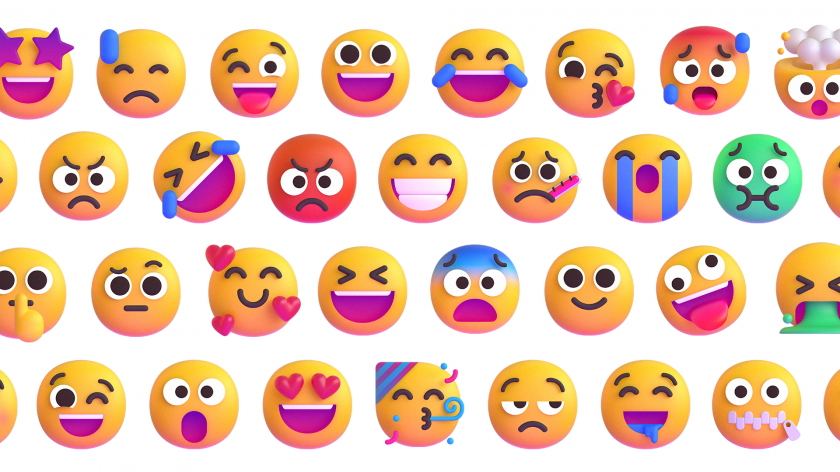 “Play is vital for things like creativity, brainstorming, developing and mastering new skills, and team building,” says Meghan, “but we haven’t typically been open to giving play a place at work or in our work tools. Because of our associations with work and adulthood, play can at times make some people uncomfortable—even though we’re fundamentally built for it.”

Her research suggested that when done right, emojis can help soften or intensify your tone, add a sense of fun and playfulness to otherwise mundane interactions, and allow us to express ourselves in a way that’s more universal than the written word. 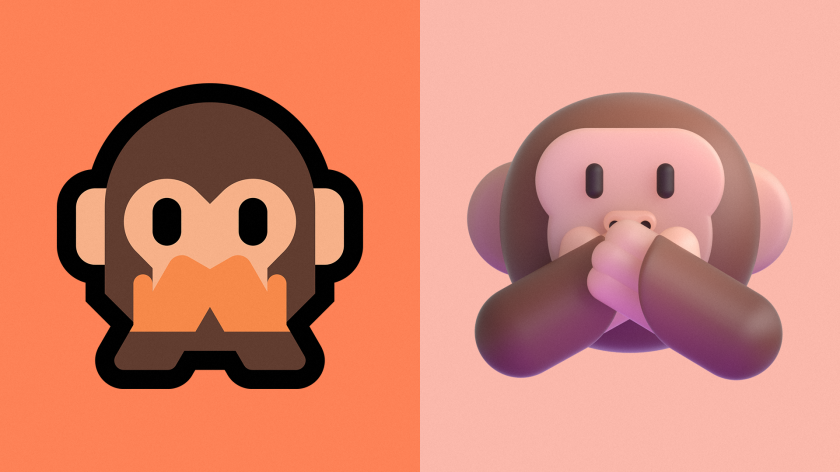 When it came to the design process, Microsoft took the unusual step of eschewing symmetry, choosing an imperfect circle instead to be the silhouette shape for a head.

This was based on the concept that no person is perfect, and so an element of imperfection would help evoke a feeling of connection and humanity.

With so many emojis to redesign, consistency was also vital. This was achieved by basing all the designs on simple geometric forms, just as Microsoft’s connected icon system is.

The team paid close attention to the expression in the emojis’ eyes and leaned into pronounced eyebrow expressions. It was important to the designers that while they were adding a greater level of detail and depth to the characters, the clear intent of their emotions should still be abundantly clear.

They also favoured bright, saturated colours and bold forms to make the designs uplifting, inspiring and able to immediately engage people at an emotional level.

Here, we’ve shown just a few of the 1,800+ new Microsoft icons, which will be rolled out across its apps over the next few months. And quite simply, we can’t wait to see the rest.

In the meantime, though, it’s clear that Microsoft has really put thought into these new characters and executed their vision with precision and style. And in doing so, they’ve delivered a fresh and original approach to emoji design that’s likely to make big waves across the web.