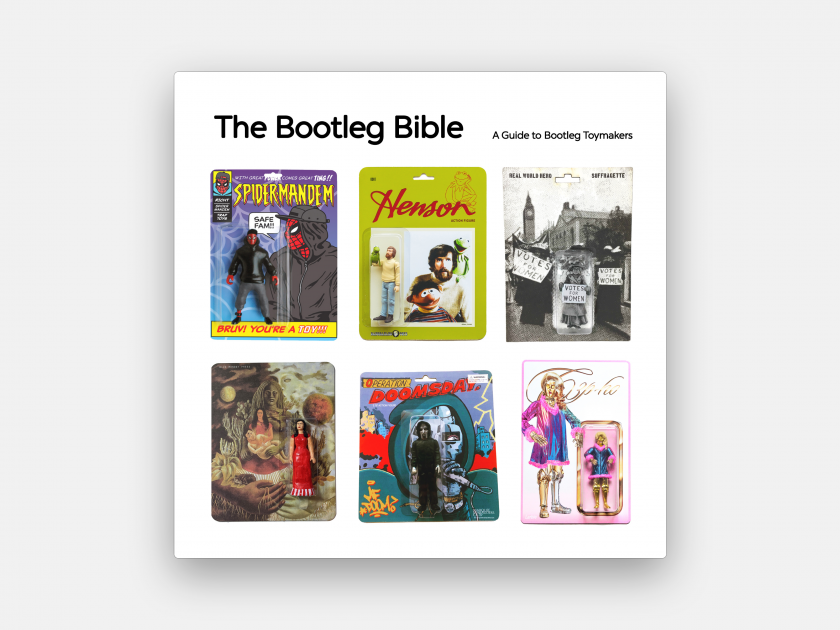 You might be familiar with the official Avengers toys, but did you know there are bootleg characters crafted by indie toymakers globally, celebrating cultural icons that didn’t make the cut but their makers believe deserved an action figure? A new book by Blue Monday Press reveals more about this fascinating world of bootleg toys.

The Bootleg Bible, which is available to pre-order before its official release later this month, is a guide to bootleg toymakers from around the world. Published by Blue Monday Press, it features interviews with a host of international toymakers including Trap Toys, The Sucklord, Dano Brown, Obvious Plant, Marquee Marauders Club, Larbie World, and RYCA, as well as its author, Ben Gore. There’s also a huge showcase of the work of other excellent artists from around the world.

In the deliciously enlightening pages, we hear from LA-based Jeff Wysaski, the creative brains behind Obvious Plant, whose first foray into the bootlegging world was with the launch of The Revengers – a series of “purposefully terrible” bootleg figures based on The Avengers. There’s also Dano Brown from California who brought us Raoul Duke of Fear and Loathing in Las Vegas in electrifying toy form as well as a tribute to rapper Slick Rick, aka Richard Martin Lloyd Walters. “I force myself to work on art like it’s a real job,” says Dano, “because to me it is. It doesn’t take much force because I love it but I wake up early, start right away, and don’t stop until the evening aside from a lunch break. I find inspiration from new toys while I work on other toys usually. If I’m not feeling inspired, I work anyway. It’s the only way to improve.” 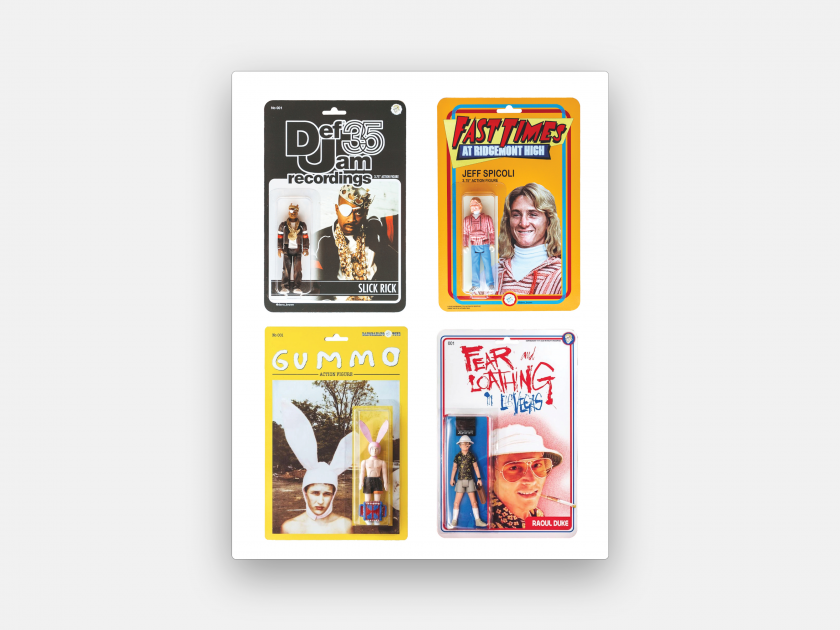 For those interested in doing the same, the book includes a bootlegging 101 guide, which takes the aspiring bootlegger through each step in the toy-making process; from finding materials to sculpting to packaging. It’s helpful advice from some of the best in the bootlegging industry.

Interestingly, bootleg toys can be one of a kind or reproduced, it all depends. But no matter their availability, they’re all made in a low-tech, DIY and homemade way without any pressure to mass-produce them in factories. This makes them extra special, as artists are free to make whatever ideas drift into their heads without the need for corporate consent or approval, not to mention the large budgets and risks that usually combine in the development process.

“Artists can use this freedom to make figures of anything they like and usually use it to celebrate cultural icons they believe deserve an action figure; whether that be their favourite films, tv shows, drag queens, artworks, musicians, or anything else they can think of,” explains Ben Gore, a bootleg toymaker and the creative force behind the book. “Artists usually begin with an existing found figure then transform it and repackage it to turn it into something completely different. Parts might be taken from different figures and combined, or sculpted on top of, repainted and repackaged so that it holds an entirely new meaning.” 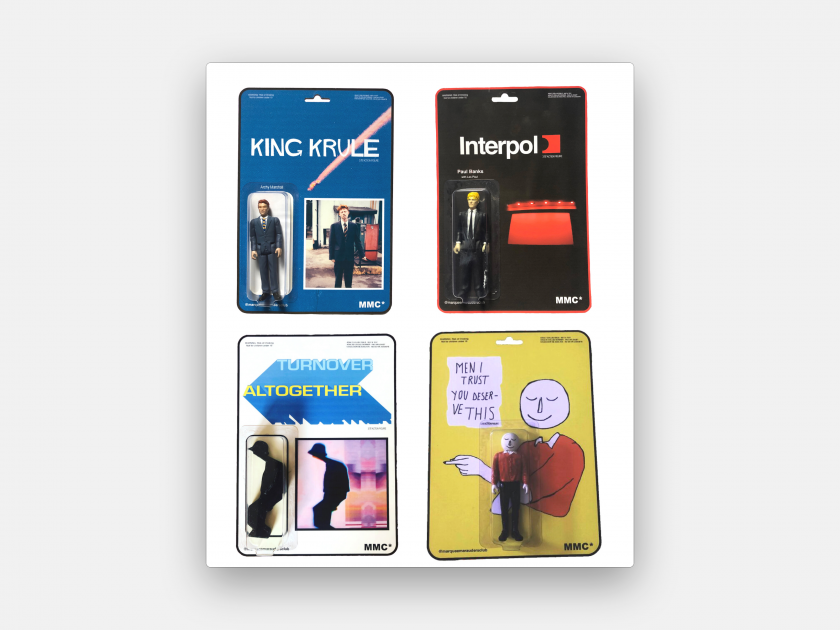 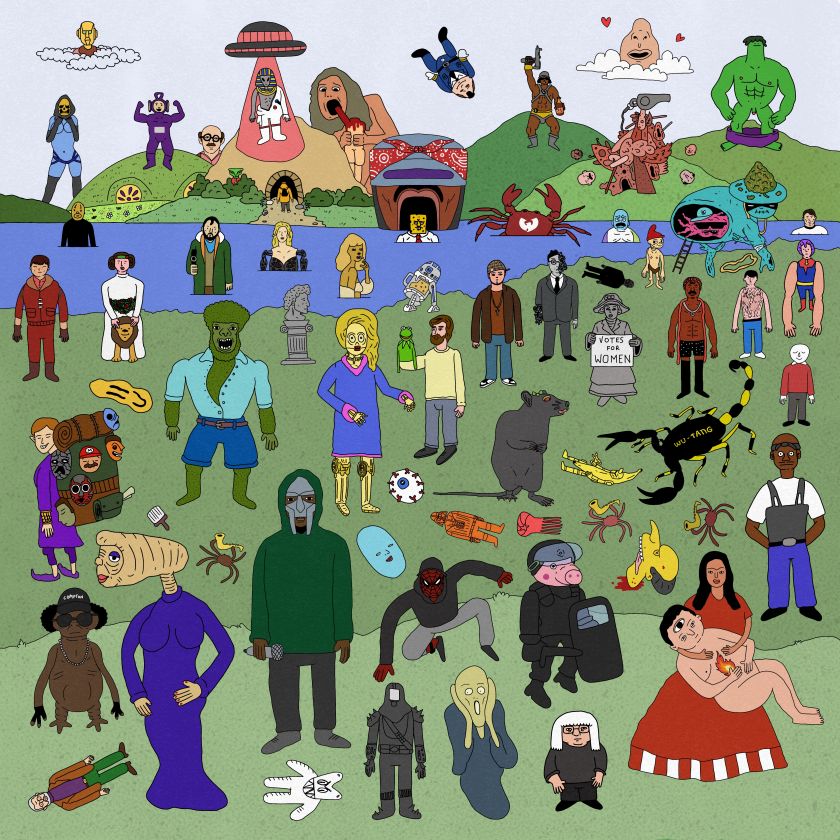 The Garden of Bootleg Delights

“I put the book together because I wanted to share and document the work of all these great artists in this rapidly growing underground art scene,” adds Ben. “I’ve been making bootlegs myself for around three years and I’m perpetually enchanted by the wonderful weirdness that bootleggers are making.”

The book will be released at the end of September but pre-orders are currently available on the Blue Monday Press website. All pre-orders come with a free print as pictured above. The print, titled The Garden of Bootleg Delights, features at least one piece from all the artists within the book. One to add to your list.